E1M6: Halls of Injustice (The Lost Episodes of Doom)

E1M6: Halls of Injustice is the sixth map of Massacre on Callisto, which is the first episode of The Lost Episodes of Doom. It was designed by Christen David Klie and previously released as a map in CHRIS_E1.WAD and later in CHRISK.WAD. According to the designer's notes in the book, it was released as CHRISK16.WAD in the first place. 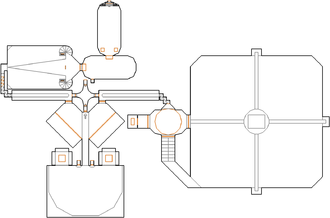 Map of Halls of Injustice
Letters in italics refer to marked spots on the map. Sector numbers in boldface are secrets which count toward the end-of-level tally.

The arrow pointing inside the first building leads to an ambush, so be warned. Then go to your right, get the radiation suit and go forward, open the door with ugly faces, and go until you found the yellow skull key, purging the area which has four similar rooms connected by the corners. Then go to the yellow door with ugly faces to the top of the similar rooms to get all the blue goodies included the blue key.

Go then the other way, open the yellow doors in the intersection of the two doors before the arrow, press the switches and go the other way. To lower the grades of the stairs just use the open key. Save before, because sometimes some stairs not go down well. This switch with the nasty bearded face moves a wall you must run to reach up the stairs near to you, use that switch to continue, then do the same with the other switch with the other staircase. There is a trapdoor to the left and to the exit.