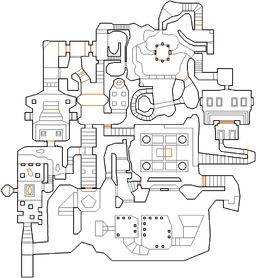 From the start, head straight forward to the base of the stairs. Go up and grab Gauntlets of the Necromancer. Continue up the stairs to a platform that will lower temporarily and lift you to the yellow key. Turn right and pass through the yellow door. Collect the Ethereal Crossbow and continue forward. You will notice a lower section of ceiling marked with beastly faces, and a green door to your right. Hurry forward under the ceiling, as it will lower to crush you if you are not careful. Now head up the short flight of steps. When you see the blue door, go up the stairs to your right, then turn left and locate a switch. Pull it to raise a second set of stairs. Drop down and go right, then right again to climb this new stairway. You will come to an outdoor area with a central structure. Collect the green key on the opposite end of this area. Drop down into the center of this area and lower the central platform with the switch to find a Dragon Claw. Take the passage bordered by a slime river and follow the stairs up to find another green door. Pass through and press the switch to lower one of the coffins. Follow the passage to a large room containing the blue key on a raised platform. In the southwest corner, locate a carving of a skull and bones. Open this wall and pass through, then turn right to locate a switch. Pull it and return to collect the blue key that has been lowered. Head back to the blue door and pass through. When you turn left, you will see a row of crushers. Dash under them while they are raised and continue forward. An ambush will trigger as you pass through the room beyond, revealing two thrones. Press the switch behind them to lower a section of the floor and head down. Go forward, dropping down a little way and then heading up the steps. Turn right and head to the exit.