E2M1: Landing Pads is the first map of Aliens TC. It was designed by Justin Fisher.

The map's subtitle on the intermission screen is Secure the area. In automap mode, the title is given as E2M1: The Landing Pads. 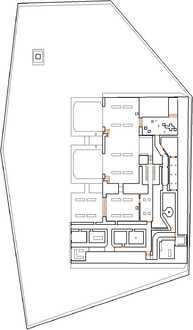 Map of Landing Pads
Letters in italics refer to marked spots on the map. Sector, thing, and linedef numbers in boldface are secrets which count toward the end-of-level tally.

Three deathmatch starts (Things 53, 54 and 62) have no flags set for any of the three difficulty classes, but because of special handling in the engine, they function normally in the level.