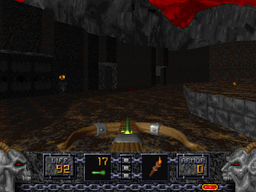 Near the starting point 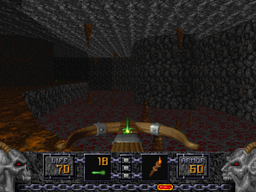 The yellow key is down there

You begin facing a wall of hardened lava. Walk around this wall to find yourself in an outdoor area facing three passages. Only the middle one is open, so go through it. At the end of the passage, collect the Ethereal Crossbow and pull the switch. Backtrack and head through the second passage which is now open. You will find yourself in a cave with a pool of lava at one side. Drop into the lava and hurry around the central rock there to find the yellow key in a teleport. Grab it and you reappear near the start of the level. Head through the yellow door into another cave. The red key is on a rock at the north end of the cave. Hurry across the lava to grab it, then go back up the stairs. Cross the bridge and use the red key to open the exit.