Difference between revisions of "E2M6: Damned Bastards (Slaughter Until Death)"

E2M6: Damned Bastards is the sixth map of Slaughter Until Death. It was designed by Denis Möller, then known as Panza, and includes "Sinister" as a replacement music track.

The same level appears as E2M7 in the 1995 WAD compilation, Heroes. 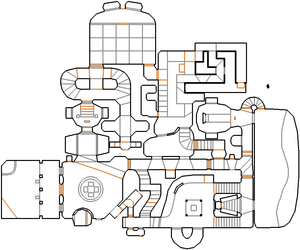 Map of Damned Bastards
Letters in italics refer to marked spots on the map. Sector numbers in boldface are secrets which count toward the end-of-level tally.

* The vertex count without the effect of node building is 1059.