Revision as of 12:57, 3 April 2022 by XymphBot (talk | contribs) (→‎Speedrunning: Automated edit - Verify no DSDA map records)
(diff) ← Older revision | Latest revision (diff) | Newer revision → (diff)
A checked version of this page, approved on 3 April 2022, was based on this revision.
This level occupies the map slot E2M6. For other maps which occupy this slot, see Category:E2M6.

E2M6: Veneficus Arx is the sixth map of episode 2 of Heretic Treasure Chest. It was designed by Kim Bach (Torn) and uses the music track "Wait" from Heretic, created by Kevin Schilder. 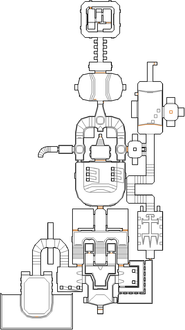 Map of Veneficus Arx
Letters in italics refer to marked spots on the map. Sector, thing, and linedef numbers in boldface are secrets which count toward the end-of-level tally.

Take the Ethereal Crossbow and arrows in front of you then turn left and head up and down two sets of steps, passing some fire gargoyles and a gray platform holding the blue key on the way, until you see a silver door on the left. Go through the door and head up either set of steps then turn right and go down a winding staircase guarded by sabreclaws until you reach a room with a large trident-shaped light. Push past the gargoyles and press the switch at the opposite end of the room, which will lower eight pillars holding various supplies and the green key. You will also need to contend with two disciples of D'Sparil, plus an iron lich on bringest them oneth (BTO) skill level or higher.

Go back up the winding staircase and push past some nitrogolems that have been released, then return to the platform with the blue key and head north to a switch which will lower the lift underneath you, taking you to a cavern with an undead warrior. Open the green key door behind the warrior, kill some waiting ophidians on BTO or higher then continue north to a round passage surrounding a stone structure. Walk past some fire gargoyles to the north-west side of the structure to find a door leading inside it, then head through three chambers to a larger door guarded by sabreclaws. Go through the door to find a chamber with two Flame Orbs and a switch; press the switch then backtrack to the lift, watching out for various enemies that have been released from closets. Back at the lift, use the nearby switch to lower it then ride the lift up to find that the platform holding the blue key has lowered.

Take the blue key then head south down either passage to an outdoor area with a curved ledge. Open the silver door in the south wall then head forward to a junction with weredragons on either side, go through the north-east door then immediately turn left to press a switch that will raise three staircases. Go up the east staircase and open the metal door at the top (requiring the blue key) and go straight forward through a doorway into a dark passage containing golems, which you can follow round to a switch guarded by an undead warrior ghost. Return to the previous room and head west through a chamber with green walls (there will be an iron lich here on BTO or higher) to another square room with gargoyles. Head north-west up a curved staircase to a large chamber with some weredragons and press the switch behind them, which will release some disciples behind you, then return to the chamber with green walls to find that three alcoves have opened containing undead warriors and the yellow key.

Go back to the area with the curved platform and go down the steps to a large gold door which requires the yellow key. Open the door and destroy one or two liches waiting behind it then enter the teleporter at the top of the stairs to finish the level.

In the area with three staircases at the south end of the level, go through the north-west door to find a Silver Shield among some barrels. After raising the staircases, go up the middle staircase to reach a hall containing a Hellstaff.