Unchecked
This level occupies the map slot E2M8. For other maps which occupy this slot, see Category:E2M8.

E2M8: The Siege of Pnath is the second boss map of Strange Aeons, designed by Impie in 2015 and constructed in Doom Builder 2. It uses a music track from System Shock 2. 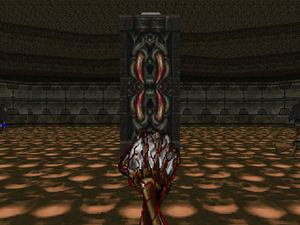 The deceptively calm beginnings of the map. 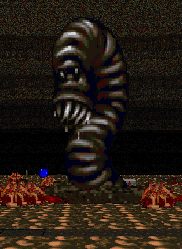 One of several gigantic Dholes.

You begin this slobberknocker with a friendly Ghoul to back you up. After securing the central arena and collecting the powerups, "use" any of the four doors to open them all, allowing several hordes of Flayworms to flood in. Kill most or all of them before leaving the arena: as soon as you set foot in the next part of the building, more doors will open and give a small platoon of Spiderbabies a clear shot at your head. Kill them quickly and step further into the base to open the last set of doors: just as the eldritch army begins to swarm the base, a regiment of Ghouls teleports in to help you fight them off.

Four switches rest on the upper tier of the base, accessed by lifts on the outer walls. Flipping each switch lowers a powerup pillar in the central arena. When all four are lowered, you will have a very short time to resupply before the base collapses and every monster -- friendly or otherwise -- is killed by the explosive arrival of several gigantic Dholes. Kill the Dholes to reach the exit slipgate...and suffer a horrific vision of things to come.

The Dhole is a colossal worm that tunnels underground when it moves, making it impossible to shoot except when it rears its ugly head. It is among the fastest creatures in the game and can easily catch you if you trip up. The ground quakes wherever it moves, giving you a rough idea when it's getting too close for comfort.

It fires three of the same slime projectiles as the Grell, which will poison and slow you for a limited time. The slowing effect is a major problem, because the Dhole bursts out of the ground with explosive force akin to being shot in the face with a rocket. If it surfaces next to you, you're in for a world of hurt. The Dhole also has an explosive death sequence: basically keep far away from it at all times.

The Vale of Pnath is an Underworld landmark in H. P. Lovecraft's Dream Cycle, where Ghouls discard the bones of their human victims after devouring them. Dholes are known to dwell there, hence their role as boss monsters.