Revision as of 12:27, 21 February 2022 by XymphBot (talk | contribs) (→‎Speedrunning: Automated edit - Verify no DSDA map records; rm empty Misc section)
(diff) ← Older revision | Latest revision (diff) | Newer revision → (diff)
A checked version of this page, approved on 21 February 2022, was based on this revision.
This level occupies the map slot E3M10. For other maps which occupy this slot, see Category:E3M10.

E3M10: Fortress of Fear is the tenth and final map in the Shadowlands episode of Masters of Chaos. It was designed by Caleb26 and uses the Hexen music track "Chapel 2". 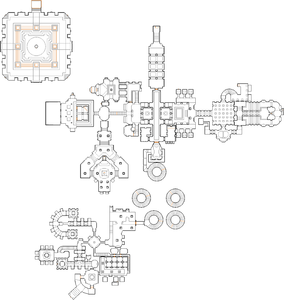 Map of Fortress of Fear
Letters in italics refer to marked spots on the map. Sector, thing, and linedef numbers in boldface are secrets which count toward the end-of-level tally.

You begin in a chamber with four tunnels leading away from it. Take the ammo around you and head into the south tunnel, going round the corner and down a staircase where you can kill a waiting nitrogolem. There are doors to the left and right - go through either of the right-hand doors if you want an Ethereal Crossbow and a Bag of Holding, otherwise continue following the passage and go round the corner where a set of steps will descend. Take the stairs down to a chamber with a lava pool, then head west to a small doorway.

Beyond the doorway is another lava pool surrounding a round column. Head west or south through the lava until you reach a wooden platform, then press use on the gray wall to lower a lift and ride it up to a curved chamber. Dispatch any waiting sabreclaws and proceed south-west to a switch guarded by a disciple of D'Sparil. Take the Tome of Power here and press the switch, then return to the lava pool to find that the round column has opened. Destroy the iron lich waiting inside it and collect the green key it was guarding.

Backtrack to the start point to find that two alcoves have opened containing disciples. Kill them then go through the east tunnel and turn left, taking the Wand of Embers before climbing the steps to a broken bridge. Kill the Bormereth on the other side of the bridge, then jump across to go through the door with green key gizmos on either side. Climb up the round staircase and follow the yellow passage at the top to a room containing three sabreclaws.

Take the items in this room, including a Morph Ovum, then head north through a wide stone door to a wide hall lined with brown pillars. Turn right and walk through a stone archway, then turn left to face two undead warriors and a knight archer guarding a switch. Press the switch and turn round to kill four dark bishops which are revealed behind you, then return to the hall and turn right, then left at the next junction.

You will enter an area with nitrogolems. Go south up a staircase (raised when you pressed the earlier switch) until you reach the top, but have your weapons ready as a wall will lower on your right revealing golems and a vampire. Slay the enemies here then press the switch in the east wall and head through the door that opens, then turn left and follow the passage to a room with a wooden floor - the north and south doors are currently sealed, so kill the roaches here then head west past a crushing ceiling to an area with a grated floor.

Follow the lava channel round to an area with wooden columns then pass through either of the doors to the east. Take all the items in this chamber and prepare your weapons and artifacts before pressing the switch in the north-east corner - not only will the entrance to this area be sealed, but two alcoves containing weredragons will open in the area outside the room and a variety of other monsters will teleport in. Once they are dealt with, step into the teleporter in the north alcove to return to the chamber before the crusher.

Head through the south door which has now opened and head up the steps, watching out for sabreclaws and undead warriors ambushing you from the sides. When the path splits, go left or right and follow either path to a room with a tiled floor. Destroy the iron lich at the north end of the room then go into the fenced area in the middle of the room and press the switch here. This will open the stained-glass windows around you to reveal bishops, disciples and a vampire - step out of the fenced area quickly and leave the room to avoid being surrounded.

Head east past the column that concealed the bishops to find three staircases. Go down any of them to a chamber with ophidians and a butcher, then turn right and go through the silver door to return to the area with the pillared hall. Head east through two archways to a new area with a water pool and kill any weredragons waiting here, then step on the moving floor next to the pool and let it carry you to the upper floor which is guarded by archers.

Step off the lift and turn left to see three green passages ahead - go into the west passage, kill the waiting ophidian and press the switch behind it, then return to the lift and look east to see that a wall has opened revealing butchers and an invisible warrior. Kill these enemies then follow the tunnel behind them to a large pit with square platforms - kill the fire gargoyles that emerge from the doorway ahead, then carefully jump across the platforms to the opening in the north wall; the pit is lethal if you fall into it.

Once you reach the opening, go down the curved steps and follow the passage past sabreclaws and a butcher to a switch. The passage will darken as you approach the switch, and pressing it opens two alcoves containing gargoyles and undead warrior ghosts as well as lowering several pillars with ammo pickups. Kill the monsters and take the ammo, then return to the pit to find that the east platforms have lowered to form steps, allowing you to jump across them to the doorway in the east wall.

Head east through an arched tunnel and enter the chamber behind them. Slay the roaches that ambush you from either side and press the switch in the east wall, which will lower the walls behind you to reveal a large water pool containing gargoyles and undead warriors. Head east through either of the water-filled tunnels to a chamber guarded by an ophidian, then press the switch in the west wall which will allow you to reach the blue key. Step through the wall that lowers behind you to find a teleporter, which will return you to the passage before the large pit.

Head west and drop off the ledge to return to the water pool where you fought the weredragons. The two brick structures in the center of the pillared hall have opened and released a number of green chaos serpents, and dark bishops have been released from the west - kill these monsters then go into each structure to find a Tome of Power and the blue key.

With the blue key, head to the north end of the hallway lined with pillars to find a door with blue key gizmos. Open it and slay the monsters waiting on the other side, which include golems, nitrogolems, butchers, undead warriors and disciples. Follow the passage and climb the staircase at the end to a teleporter; prepare your weapons and artifacts before stepping into it.

You will find yourself on a round platform, facing two ophidians and a Sentinel. Press the switch in front of you and the platform will start to rise upwards towards Voltrog's lair - you should be able to destroy the Sentinel by the time the floor has finished rising. At the top, destroy the waiting nitrogolems and climb any of the wooden stairs; a large number of monsters will teleport in as you climb each step, including a maulotaur. Instead of fighting these new arrivals, press the four switches in each corner of the arena to reveal Voltrog himself - his attacks should clear most of the monsters for you, letting you save your ammo for Voltrog.

Voltrog is a larger red version of Korax with 13,000 health who can launch fireballs from his six arms - he is also capable of raining meteors from above, drawing lines of fire across the floor and can even release a bomb which explodes and sprays fireballs in a spherical pattern across the arena. Use the large columns around the arena to give you cover, as Voltrog only attacks when he can see you; if he can see you, stay on the move or you risk having meteors dropped on you. If you need more ammo, the chamber that Voltrog came from holds large ammo pickups and four Skull Staff Charges. Voltrog is immune to damage from his own attacks.

When Voltrog finally dies, his body will explode in a shower of meteors and all the columns will lower to reveal exit teleporters. Step on any of them to finish the game.

From the start, head into the north tunnel and follow the passage past an ophidian and two butchers to reach a Dragon Claw. From here you can go left or right to find additional pickups, including two Quartz Flasks and two Timebombs of the Ancients.

A Mystic Urn can be found on the ledge west of the structure holding the blue key. It can be reached by dropping off the higher ledge to the west.

When you reach the pit with the square platforms, jump across them to the opening in the south wall and turn left to see a passage guarded by three sabreclaws. The chamber behind them contains a Skull Staff.

The Sentinel is unable to spawn guardian cubes to assist it while the round floor is moving. Because the cubes are spawned on a floor moving upwards, they are considered to have spawned below the floor and so never materialize.

* The vertex count without the effect of node building is 5871.