E3M7: Limbo is the seventh map of Inferno in Doom. It is referred to as Gate to Limbo on the intermission screen. It was designed by Tom Hall and Sandy Petersen, and uses the music track "Waltz of the Demons". The name obviously comes from Dante Alighieri's epic poem, the Divine Comedy, where Limbo is described as the first circle of Hell, a somber place where the unbaptized souls dwell (Canto IV). The par time is 2:45.

This level is known for its multitude of teleporters, many in recognizable pillar structures, that take the player all across the map. 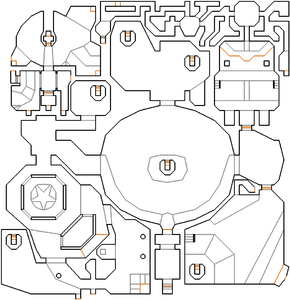 A set of 4 shotgun shells (Thing 62) and an energy cell (Thing 123) have no flags set for any of the difficulty classes, so they do not actually appear in the level.

The switch that is tagged to lower the wall with the baron behind it in the map's south east corner is also tagged to the two blue doors along the east side of the map. However because the floors of these doors are already the same height as the surrounding floors, this has no ill effects on the map.

Linedef 971 above the north west teleporter in the blood maze lacks an upper texture on one of its visible back sides, hence producing a hall of mirrors effect.

There are 33 known anomalies in this level's REJECT table.

The player can skip most of the map by rocket jumping on an upper marble edge in front of the exit door and using a lost soul as a surface for the rocket to explode against.

A primitive version of this level appeared as E2M1 of Doom 0.5. It was originally meant to be the starting level of Episode 2: Lost in Hell mentioned in the Doom Bible. This level cannot be played in the 0.5 alpha, however, because it references non-existent textures, and this version of Doom will refuse to load a level that references invalid texture indexes for one-sided linedefs. If the level is inserted into Doom 0.4, it will be able to load and play (typing doom e2m1 into the command prompt), but it will crash immediately if a one-sided linedef that references a non-existent texture enters the player's viewpoint. The missing textures are indexes 132 and 133 (0x84 and 0x85 in hexadecimal, respectively), but no such texture index exists in any known alpha build. Doom 0.3 contains 51 valid wall textures (ranging from 0 to 50), Doom 0.4 has a total of 119 (ranging from 0 to 118), and the 0.5 alpha in which this level is included has a total of 128 (ranging from 0 to 127).