Unchecked
This level occupies the map slot E3M8. For other maps which occupy this slot, see Category:E3M8.

E3M8: Flytrap is the third boss map of Strange Aeons, and the conclusion of the main campaign. It was designed by Impie in 2015 and constructed in Doom Builder 2. 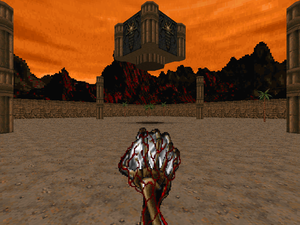 Entrance to the Spider God's lair, seen in a vision at the end of E2. 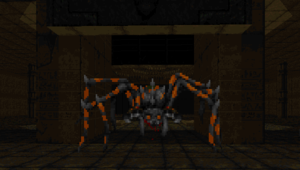 The Spinner in Darkness and its hideous humanoid face.

It's as straightforward as a map can get. Drop down the hole and grab all the guns. Grabbing the Soul Sphere opens the walls ahead of you. Ominous tremors foreshadow the horror that is to come.

Go to the opposite side of the arena and "use" the altar to release the Spinner in Darkness and its brood. Your best hope of survival is to be constantly moving, and use the Ammo Spheres to make your arsenal last. When the beast is dead, the wall opposite the altar opens, revealing the exit slipgate.

The ultimate villain of Strange Aeons is a colossal spider with a human face that catapults its babies into your lap whenever it flinches, and spits balls of fire and poison in a spread. It can easily outrun and outmaneuver you as well, especially when the arena fills up with angry spiders. When it finally dies, it gives birth to a smaller version of itself, which sports a hitscan attack and continues birthing baby spiders. You can ignore the smaller spider and flee to the exit if you don't care to exterminate the entire map.

Between the Spinner's speed and the sheer number of spiders it produces in such a short time, it is very easy to get overwhelmed. Finding Episode 3's BFG9000 is essential; otherwise prepare for a long and frantic battle.

The giant spider encounter was present in Impie's 1995 sketches, hourglass layout and all. This makes Flytrap the only true surviving level from the original project.

The Spinner in Darkness is an alternate name for Clark Ashton Smith's spider deity Atlach-Nacha, which longs to use the Dreamlands to escape to earth. By clearing this level, the player has essentially slain a Great Old One.