E3M9: Warrens is the secret map of Inferno in Doom and can be accessed from E3M6: Mt. Erebus. It is based on E3M1: Hell Keep, and is similar until the natural end of E3M1, at which point the player must retrace his steps. It uses the music track "Hiding the Secrets." The par time is 2:15.

On entering the level the player becomes aware that the scenery is familiar. The map is identical to E3M1 until the player reaches the area which formed the exit of this map.

The player is suddenly confronted with a Cyberdemon in place of the level exit. From this point onwards, sections of the map have opened up to reveal new regions and more enemies. The player must retrace their steps to beginning in order to find the true exit.

It is possible to lock yourself out of the first room by pressing the button to lower the first door in the level and then quickly running through the door before it closes. This will prevent you from beating the level. (Tested on the Collector's Edition of Doom and also on the Xbox 360 Live Arcade version) 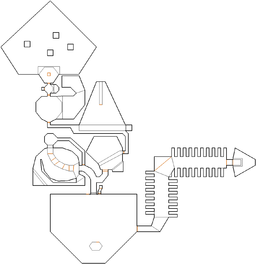