This is the stable version, checked on 8 September 2020. 1 pending change awaits review. 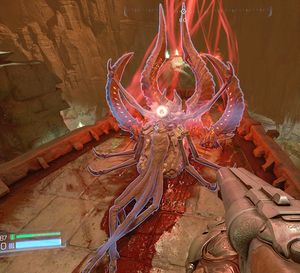 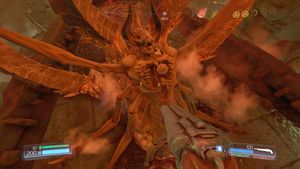 The Elemental Wraiths were beings of immense, god-like power which were worshipped by the Argenta, the peoples of Argent D'Nur, and are significant in the backstories of Doom (2016) and Doom Eternal. The Night Sentinels, the elite military of the Argenta, served as both guardians of the Wraiths, and as a contingent against their unpredictable wrath. In the fall of Argent D'Nur, the Wraiths were slain by the Hell priest Deag Grav, and their souls were used to forge the Well, another source of Hell's Argent energy. Another name given to the Wraiths was the "Firstborn".

The Wraiths are credited with the creation of life on Argent D'Nur. They were released by (or from within) a giant impactor known as the Cosmic Spear which struck the planet in primordial times and accelerated the evolution of life. Wraithcall, the mystic power of the beings, could awaken monsterous giants known as the Ancestrals, against whom the Argenta struggled for their continued existence.

Study of the Wraiths also yielded a potent form of energy which came to be known as Sentinel energy, which powered all of their technology. When the Maykrs later introduced themselves to the Argenta, worship of the Wraiths was replaced by worship of the Maykrs. Because of this transition, the beasts were put to slumber, though the Argenta continued to channel their energy, as evidenced by the Crucible blades which are made of "Wraithfire," as well as widespread use of blue flame lamps and Sentinel batteries.