This article is about the Doom item. For the Strife ammunition type, see Energy cell (Strife). 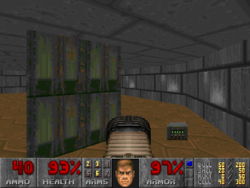 An energy cell in a secret area in Doom E2M1: Deimos Anomaly. 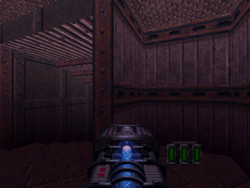 An energy cell next to a staircase in Doom 64 MAP07: Research Lab.

An energy cell is an ammo container used to power the plasma gun and the BFG9000 in Doom and Doom II, and additionally also the Unmaker in Doom 64. In the original games it is depicted as a small dark gray container shaped like a box and displaying small green lights or LEDs, while in Doom 64 it looks more like three different ammo containers attached together. It holds enough energy to fire the plasma rifle 20 times (or 40 on the I'm Too Young To Die and Nightmare! skill levels). While the plasma gun can be discharged one unit at a time – with difficulty, due to its rapid rate of fire – each BFG shot consumes 2 whole cells (or 1 on NM and ITYTD). The Unmaker on the other hand has a different ammo consumption depending on how many Demon Keys the player has collected, ranging from one at zero keys to three at full keys.

In the IWADs the energy cell is first encountered on these maps per skill level:

The IWADs contain the following numbers of energy cells per skill level:

In Doom RPG, the plasma pickup is called a plasma box. It gives the player either 4 or 10 cells.