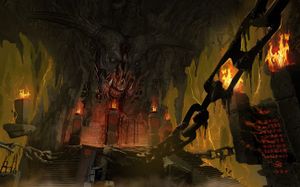 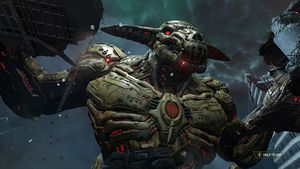 In Doom Eternal, the Icon of Sin is resurrected by the Khan Maykr after the Doom Slayer stops her plan of corrupting the Earth using the Hell priests. She creates a powerful suit of armor for it and attempts to control it by means of a ritual; however, the Doom Slayer destroys the heart of the Betrayer's son, which unleashes the Icon from all control and sends it on a rampage across the Earth. In order to save Earth and the entire universe from being consumed, the Doom Slayer must destroy the Icon of Sin in the game's final battle.