Difference between revisions of "Firemace"

The Firemace is a weapon from Heretic. Although it looks like an ordinary mace, it is used as a ranged weapon.

Using a Tome of Power causes the Firemace to slowly launch huge metal balls that bounce around, seek enemies, and kill any non-boss (including other players, even in invulnerability mode) in one hit, but deal only 18-144 damage to bosses. However, if a player has a Chaos Device in his inventory when a powered sphere hits him, he will automatically use it and only lose half of his health instead of dying. The power mode shots may also travel through teleports and can even telefrag the one who fired it.

Neither mode is capable of hitting ghosts and spheres will simply disappear when they bounce into a liquid. Maximum capacity is 150 shots, or 300 with the Bag of Holding. 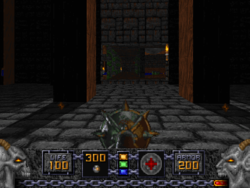 A player cheating to get the Firemace on the first level.

A notable feature of the Firemace is that it only has a ~75% chance of appearing in a level when not in the deathmatch gamemode; also, when multiple Firemaces are placed in a level, only one has a chance to appear, allowing for some minor randomization in Heretic maps.

If the weapon has appeared, it can be first found at one of three possible locations in E2M3: The River of Fire, all of them being in non-secret areas. Depending on the player's choice, the next map where the weapon can be obtained is either E2M9: The Glacier or E2M6: The Labyrinth. Both levels have four different locations for the Firemace.

The unpowered Firemace has an unparalleled firing rate, making it highly effective at stunlocking slow, high-HP enemies such as ophidians, weredragons and even iron liches at medium to close range, being even more effective than the Dragon Claw and Hellstaff at doing so. Conversely, it is difficult to avoid wasting a few shots, as the smallest press of the trigger will attempt to launch four rounds, compared to the Hellstaff's two and the Dragon Claw's one. The effectiveness of the Firemace can be increased even further if the balls are allowed to bounce before impact, bringing the splitting effect into play, though this is generally difficult to achieve.

When powered, the Firemace is most useful at near point-blank range to destroy non-bosses in one hit, or else in large open rooms populated with enemies where the balls have room to bounce and seek on enemies. It is also possible to fire at enemies through a teleport in some situations. The most effective use of your mace spheres is on enemies with high HP, since it is an instant kill against minions in any case. The giant balls will have more damage output against a full-health ophidian, weredragon, undead warrior, disciple or sabreclaw than they can ever do against a boss monster.

The Firemace becomes less useful in areas that are flooded with water, slime, or lava, as it must then impact an enemy before hitting the floor to have any effect. Additionally, players may find it difficult to aim while moving as the player's momentum affects that of the balls that are fired, especially in powered mode. It is also completely useless for fighting ghost monsters.

In Heretic version 1.0, surplus mace spots would spawn other objects, depending on the episode number of the map: Disciples of D'Sparil in E1, Weredragons in E2, Ophidians in E3, and (through a bug) Shadowspheres in the E4 secret slot. The tomed shots were also allowed to instantly kill iron liches in this version. However, all later versions removed the substitution effect, placing nothing on the extra mace spots, and gave iron liches resistance to the tomed mace balls.

In an interview, Michael Raymond-Judy said that the internal nickname of this weapon among the developers was the "lobby ball".[1] Evidence of this remains in some of the sound effect names containing "LOB".

In the IWADs the firemace spawner is first encountered on these maps per skill level:

The IWADs contain the following numbers of firemace spawners per skill level: