Frozen Time is a single-level PWAD for Doom II authored by Alexander S. (Eternal). It requires an OpenGL port with support for ZDoom extended nodes, hi-res textures and tall patches. The map uses the music track "Junkie Smack" by Mark Klem (from MAP29 of Memento Mori II), the title music track " ", and the untitled text screen music from TNT: Evilution by Tom Mustaine as intermission music.

Frozen Time was chosen as a runner-up in the 2012 Cacowards. 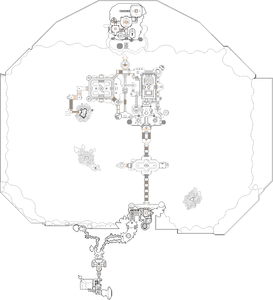 Map of Frozen Time
Letters in italics refer to marked spots on the map. Sector numbers in boldface are secrets which count toward the end-of-level tally.

* The vertex count without the effect of node building is 22772.

The visual complexity of this map makes it a good stress test to benchmark renderer speed. This is because most of the map is made of two-sided lines, with overall relatively few single-sided lines to block the line of sight. This is the most inefficient use of the BSP algorithm since most of the map will have to processed. In particular, the bridges built out of a dense lattice of middle textures result in a lot of overdraw.