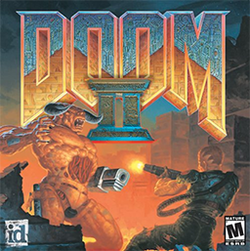 Gerald Brom (born March 9, 1965) is an American gothic fantasy artist and illustrator. He is known among gamers for his work on role-playing games, collectable card games, comics, and video game cover art. He has also worked in the fields of movies, television, and book publishing. He is notable here for creating the cover art for both Doom II and Heretic.

Brom began drawing and painting in childhood. A military child, he was well traveled, and obtained his professional nom de plume Brom by simply being called by his last name alone frequently during his early years. Though not professionally trained, Brom does not consider himself "self taught," as he has always consciously emulated the techniques of artists he considers influences. Amongst those, he lists Frank Frazetta, N.C. Wyeth, and realist illustrator Norman Rockwell.

He began his career at the age of 20, and within a year had two national art representatives and was doing work for firms across the nation. His involvement in fantasy and gaming started when he was hired by Gary Gygax's TSR, Inc. to work on its role playing games and books, Dungeons & Dragons in particular. He has been directly involved in the design of many campaigns, including especially Dark Sun, his art providing direction for the unfinished game design. This influence has extended to involvement in the development end of video games as well.

He returned to the freelance market in 1993, and became involved in various role playing, card game, and video game projects. He returned to TSR in 1998, and has also worked for its successor, Wizards of the Coast. 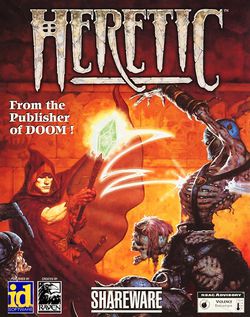 Heretic box art by Brom, which was also adapted as the game's title screen.