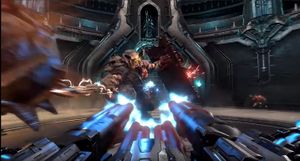 The gladiator is an armored Hell knight- or baron-like enemy that appears in Doom Eternal. It is a boss exclusive to the Sentinel Prime level, and is the only encounter in that mission. It protects the medallion that holds Deag Grav's soul, so the Doom Slayer must defeat the gladiator in order to kill him. The gladiator carries a large shield and attacks with a combination morning star and flail weapon, and is fought in two phases.

It resembles the Hell nobles of the original games more strongly than their Doom (2016) or Doom Eternal counterparts, though it is distinguished by the presence of a metal eye patch and armor. The gladiator was first shown momentarily in the second trailer released on January 14, 2020.

In the second phase the gladiator becomes faster and more aggressive, replacing its destroyed shield with a second flail; however, it is now more vulnerable to damage. Like the first phase, it is possible to stagger the gladiator by attacking when its eye flashes green, allowing the player to inflict more damage by pressing the glory kill button. When the gladiator spins one of the flails, the player should avoid attacking as any projectiles will be deflected (possibly hitting the player instead). In addition to striking with and throwing the flails at the player, the gladiator can also throw the two flails so that the player is trapped between the chains; it then fires a series of energy waves which the player must jump over or step between, before charging towards the player. Once the gladiator's health is depleted, it can be finished off with another glory kill.

During the fight, fodder demons will appear which the player can kill for health, armor, or ammunition. The gladiator can also summon heavy demons as its health is reduced.

After the fall of Sentinel Prime to the forces of Hell, the Hell priests repurposed the Coliseum from a place of trial by combat, where prisoners of the Argenta were given a chance to prove their worth as soldiers, into a place of blood sport to entertain the debauched remnants of their civilization. The ancient Gladiator was sent to the Coliseum to act as an executioner. Wielding an accursed shield containing the souls of its many victims, the Gladiator has never been defeated and is effectively immortal until the shield is destroyed.