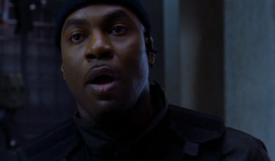 Sergeant Gregory Schofield, also known as Duke, is a character from the 2005 Doom movie who is obsessed with two things: girls and games. He is the best friend of Destroyer, whom he claims is the closest thing he has to a family, and he seems to be a big hit with the ladies. He immediately develops a crush on Samantha Grimm.

Duke stays with Sam in her lab for most of the movie's events, initially helping Sam and Dr. Jenna Willits keep an eye on Dr. Todd Carmack. Later, while Sam dissects the imp that killed Goat, Duke goes to retrieve an extra bonesaw for her, but is attacked by a mutant Carmack. Duke tries to kill him, but his rifle jams. Duke attempts to make it back into the lab through a nanowall. The imp follows, only to be trapped in the nanowall as Sam activates it. Sam and Duke also witness the resurrection and suicide of Goat, at which point Sam realizes the imp is Carmack, and the other imp she was dissecting is actually Dr. Steve Willits. Sam and Duke are also present when Sarge kills Carmack.

Duke later goes with Sarge and The Kid through the Ark to pursue the mutated Curtis Stahl while Reaper and Sam stay behind in the lab. While Duke is uneasy with shooting the bodies of the UAC personnel, perhaps because some may only be unconscious, he shoots them anyways, along with Sarge.

Duke eventually sets off on his own while Sarge and The Kid go elsewhere, and as a result he finds Pinky hiding under a pile of corpses. They head back to the Ark chamber where they find Sarge, Sam and Reaper. Pinky explains that he had attempted to stop the Stahl Hell knight with an ST grenade, but could not get it to work. Sarge, fearing Pinky may be infected, gives the suggestion of shooting Pinky, despite Sam affirming that he is not infected. The Kid then arrives, alerting the group to the existence of unharmed survivors. Sarge, believing them to be infected, orders The Kid to kill them, but he denies and tells Sarge to "go to Hell". Sarge kills The Kid for insubordination which causes Duke, Reaper, and Pinky to train their weapons on Sarge. The Hell knight appears and captures Pinky, and the marines attempt to follow. While trying to get through another nanowall, an imp grabs up through a floor vent at Duke's ankles and drags him down, killing him.

Duke's weapon of choice is what appears to be a standard issue RRTS assault rifle (a Heckler & Koch G36 mocked up to look futuristic). Like all RRTS weaponry, it has an ammo counting computer and an attached flashlight. When his rifle jams, Duke switches to a Heckler & Koch USP pistol.

In the novel based on the movie, Duke explains that he and Destroyer knew each other growing up on the streets. The game he plays while preparing for leave is Space Invaders.