Difference between revisions of "Guardian of Hell" 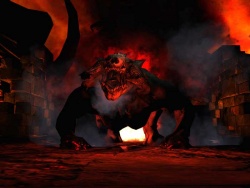 The Guardian looks vaguely like a Tyrannosaurus Rex (The designers commented that the Guardian was designed to imply that this was the form of demon Earth's dinosaurs would have feared. Because it is stated the demons once inhabited Earth and that the Guardian was what the dinosaurs feared the most, it could have caused their extinction.), but with larger and more muscular arms ending in large round fists that appear to contain cracks full of lava, muscular legs with hooves, a hunched upper body, a very long tail that ends with a ball with cracks full of lava in it, an armored back with traces of lava, and a head that has stereotypical demonic horns.

Its refuge is a large area of Hell that is filled with large pillars of rock.

Its primary attacks consist of punching with its large fists and pounding the ground, which emits spheres of energy that damage its target. It can also charge at you.

The Guardian of Hell is blind due to its age: what remains of its eyes are shallow pits.

It summons much smaller creatures dubbed Seekers, three at a time, to "see" for it and locate its targets. The seekers do not attack the player themselves, but they light the area and alert the Guardian to your location.

Killing both Seekers forces the Guardian to generate more, revealing its vulnerable spot: a glowing orb of energy in an opening of the Guardian's back. Severely damaging this orb will kill the Guardian. As you fight the Guardian, the Soul Cube will inform you of this weakness.

After killing the beast, the Soul Cube is released.

Unlike most other demons, the Guardian's body does not dissolve.

In Resurrection of Evil the head of the Guardian is engraved on some stone tablets. This could mean that either the Guardian left Hell to assist in the invasion, some of Mars' civilization saw it in Hell, or it was simply aesthetically pleasing to the game's designers.