Difference between revisions of "Health bonus" 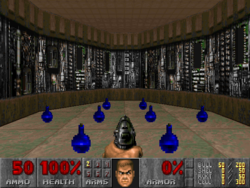 A group of health bonuses found in an alcove in Doom II MAP01: Entryway. 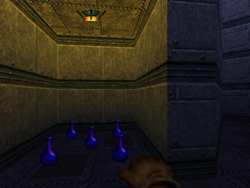 A batch of health bonuses near the starting area in Doom 64 MAP04: Holding Area.

A health bonus (or health potion) is a powerup that is introduced in E1M1: Hangar of the first Doom episode Knee-Deep in the Dead, alongside its armor equivalent, the armor bonus. Appearing in the very first room of the game, the two items are likely to be the first to be picked up by the player. It has the appearance of a small, round blue bottle with a glowing liquid inside. Doom 64 has a very similar, albeit slightly more angular design with a longer neck. Picking one up increases the player's health by 1% up to a maximum of 200%, except in Doom 64 and in console ports such as the Atari Jaguar and Sony PlayStation versions, where it instead increases health by 2% per bottle.

Health bonuses are included in the items percentage displayed at the end of each level.

In the IWADs the health bonus is first encountered on these maps per skill level:

The IWADs contain the following numbers of health bonuses per skill level: