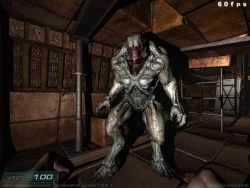 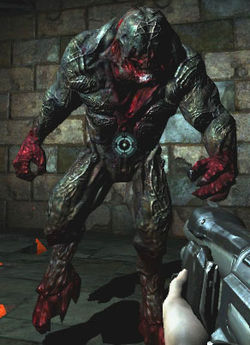 A Hell Knight as it looks in Hell.

The Hell Knight in Doom 3 is very muscular and heavy. An in-game examination of their spine indicates they have massive skeletons as well. They have no visible eyes, ears or nose. It looks rather different from the old Hell Knight, as it doesn't have any horns, hooves and doesn't look anything like a goat, but its overall body structure is similar, albeit a bit more powerful.

In Hell, Hell Knights show a different appearance than those in Mars. Their skin is greyish green. Parts like mouth, upper chest, hands and feet are red. They also have several scars along their body with a particular one in the forehead shaped like a pentacle.

When facing a Hell Knight, it is strongly recommended to use the Soul Cube or the BFG if it is necessary to take them down quickly, for they can absorb large amounts of damage. But if the situation permits, the Rocket Launcher, plasma gun, chaingun and even the shotgun are effective enough. It is a very bad idea to retreat from one when he's about to throw a energy ball as its splash damage radius is rather large and it is recommended to avoid being in close proximity to walls or other solid objects. The chainsaw, while powerful, is not a good choice against a Hell Knight. 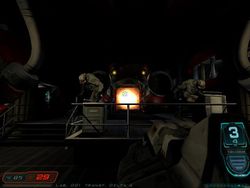 The first Hell Knight's appearance was in Delta Labs 4. A portal in a large room opens, and two Hell Knights emerge. This might be a reference to the first bosses in the original Doom, where the player must defeat a pair of Barons of Hell at the end of Knee-Deep in the Dead. These two Hell Knights are tougher than those encountered later in the game, able to survive a fully charged BFG blast.