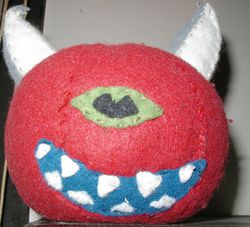 Hissy is a plush Cacodemon created by Jonas Feragen (Chrozoron) sometime around 1994-1995. Hissy has become somewhat of an icon among certain portions of the Doom community. She is also the mascot of the Doom Wiki itself. She even appears in the Skulltag source port (she is both a playable skin, and a character which appears in one of the levels), and several PWADs such as Action Doom (in the player's ship quarters in the final map).

Hissy was originally slated to go on a "world tour", visiting one Doomer every two weeks, and then passed on to the next Doomer on the list. Hissy needed to have some teeth re-sewn once she reached Eric James Roberts (Ricrob); his mother performed the repairs.

The world tour was stopped when Andrew Stine (Linguica) kept Hissy in his possession for approximately two years. A vigilant campaign known as "Free Hissy", spearheaded by Simon Howard (Fraggle), sprang up to fight this perceived injustice. Cries of "Free Hissy!" and "Hissy hogger!" were not uncommon; Linguica was even depicted as an enemy in Skulltag, with a voice sample claiming, "To free the Hissy, you must kill me, Linguica." Linguica finally turned Hissy over to Brad Carney (Carnevil) in 2000. The Free Hissy website died, but an archived copy can be found below.

Ironically, Carnevil ended up having Hissy longer than Linguica ever did, but no organised resistance corresponding to the original Free Hissy campaign surfaced. On February 5th, 2003, a passing conversation in the Skulltag IRC channel between Carnevil and Bill Koch (Bloodshedder) set up the next Hissy exchange. Carnevil received a self-addressed box full of packing peanuts in which to ship Hissy to Bloodshedder. Even though he was never on the original list, on February 19, Hissy arrived on Bloodshedder's doorstep.

In late January of 2004, Julian Aubourg paid a visit to America. After staying in Chicago with Steve Dudzik (Lüt), and several well known Doomers such as Mike Lightner (Mancubus II), Twister, Alex Mao (arioch) and Stephen McGranahan (SoM), Julian, along with Lüt, visited Bloodshedder for two days, January 30 and 31. It was at this time that the next Hissy exchange occurred. Hissy was given to them with the stipulation that Mancubus II would receive her.

Mancubus II held Hissy for 1,437 days (or 3 years, 11 months and 7 days), which is the third longest amount of "hogging" so far. On January 6th, 2008, a few members of Unidoom attended MAGFest, a large gaming convention. There, Ralph Vickers (Ralphis) received Hissy from Manc.

On September 20th, 2014, Ralphis relinquished his claim on Hissy by shipping her off to Oklahoma to be with James Haley (Quasar). In doing so, the bar for Hissy hogging has been set to an unprecedented new high of 2,449 days: over six and a half years. Quasar held Hissy for about 1,772 days before handing her over to Samuel Villarreal (Kaiser) on July 28th, 2019. Kaiser has held Hissy for 1229 days so far.

Someday, perhaps, Hissy will return to her home in Norway.