Bright Crucible is the secret level of the first hub in Hexen. It can be accessed at the end of the hub by jumping up into the mouth of the river on the Seven Portals if all of the optional areas are completed in the rest of the hub.

Other horsemen have attempted to conquer worlds only to be defeated. Here in deadly radiance lies the heart of d’sparil, first of the serpent riders to fall in battle. 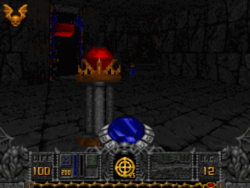 The pedestal where the heart has been put.

The level may be a little difficult due to all the monsters that are there, namely a lot of Chaos Serpents in a big open area. Killing them, especially if you are a Fighter without ranged weapons, is a bit tough. The puzzle part of the level, on the other hand, is pretty simple. Arriving with the Wings of Wrath from Seven Portals is highly recommended as they allow a larger degree of mobility.

You appear on a platform with pillars all around you. Jump off the platform either to your right or left to the grassy parts below you, killing all the monsters as you go. Note that either of these parts can be accessed from the other by jumping across a small gap at the southern end of the open area.

At both the western and eastern end, there is a high platform with a lift that can take you up. Go first onto the western one of those two. On the platform, there are some ettins and stairs that take you to a corridor. When you step in there, a lot of rooms open all along the corridor, releasing some centaurs. Kill them and go through the corridor until you arrive at a room with fireballs shooting from the statues in its corners. In the middle of this room, you will see a red, gem-like object. Take it - it is the heart of D'Sparil, the final boss of Heretic - and the fireballs will stop.

Next you need to go onto the platform in the eastern part of the level. There you will find a corridor similar to the first one, again with all the rooms opening and releasing ettins this time. Kill them all and go to the end of the passage, where you will find a painted window. Break it, behind it is another room with fireballs shooting all around. In the centre of the room there is a pedestal where the heart of D'Sparil belongs. Putting it there does not happen automatically, so you have to select the object in your inventory and use it. As soon as the heart is at its place, the fireballs will stop.

Now a long flight of stairs has risen from the big pool of mud on the south of the level, going all the way to the otherwise inaccessible platform where you had appeared. Get there and behind it, to the north, you will see that even more stairs has appeared, leading into an area with some monsters and goodies (mostly ammo, Quartz Flasks and - on higher difficulties - an Icon of the Defender).

When you are ready with the area, take the big stairs down into the pool of mud and go through it further and further to the south while being cautious for stalkers. At the end of it, invisible stairs take you down to a small mud-corridor that leads into a room with a portal back to the Seven Portals. At the mouth of this cave is a linedef which is the first one of the two triggers that open the secret door on the Forsaken Outpost.

File:Dark Crucible drawseg overflow.png
A Hall of mirrors effect occuring due to a Drawsegs overflow after the stairs have formed.

"Crucible" in this context means "severe test or trial", one of many archaic usages in Hexen.