Seven Portals is the first hub map in Hexen. It connects to all other levels on the Hub except for the prologue. It is closely intertwined with the puzzles on other maps, so you will make many visits.

The seven doors once guarded Hexen from outside invasion. Forces that had served the world now bar your way and hide a valuable secret. 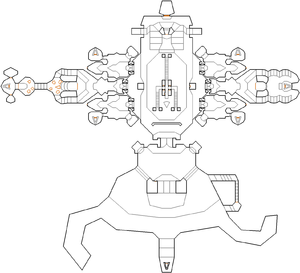 Map of Seven Portals
Letters in italics refer to marked spots on the map. Sector, thing, and linedef numbers in boldface are secrets.

You begin in front of an Icon of Korax. As it turns fiery, he delivers the first and most memorable of his cryptic taunts: “Greetings mortal, are you ready to die?” After the wall opens, you will be able to ride the elevator down to the main area. Here you’ll battle several ettins, and there are afrits in closed-off areas near the start. If you are the mage, there will also be afrits in the open. There will be crystal vials and fléchettes available. You will see seven great doors around the perimeter, guarding the seven portals you must go through. On a pillar to the east/left, there will be a bullhead switch to pull. This opens the middle door directly ahead. Behind it, there will be more monsters, including green chaos serpents. Fléchettes can be useful for dealing with these. The triangular spire in the south behind you will descend as the door opens. In medium to low difficulties, it will have your second weapon, while in harder difficulties there will only be quartz flasks. With a ranged second weapon, the serpents won’t be too much trouble.

Behind the door, you’ll find a raised wooden area with frozen demon statues, blue mana along the sides, and a window overlooking an icy cavern. Step up to the quartz flask in the window, and the cavern will open up. You’ll be able to go down the stairs from either side. There will be blue mana, crystal vials, and quartz flasks on the elevator. There are no traps here. Ride the elevator up to the portal, where you’ll enter Guardian of Ice.

Behind both doors you’ll find ettins (and afrit for the Mage), two demon statues that glow red or look metallic (for fire and steel respectively), wooden corners, and a bullhead switch. When you pull the switch, the lighting changes, and the wooden corner opens to unleash a green chaos serpent. The corner rooms contain two fléchettes and a blue mana container. You’ll find that another corner has opened up with a portal to the corresponding level, along with quartz flasks and blue mana. The Guardian of Fire portal room is made of basalt blocks, while the Guardian of Steel portal room has steel plates.

With the puzzle solved, the central western gate will now open. Behind it is a crowd of green chaos serpents and ettins. Since this area leads to the second Guardian of Ice portal, you’ll see a similar entrance room, with a raised wooden platform and frozen demon statues. There are fléchettes, blue mana and quartz flasks strewn about. Like before, go up to the quartz flask that appears in the window (barred this time) to open the cavern. Two staircases open at the sides, leading down to an icy area where pillar traps raise and lower as a warning. There are many dangers this time. Wendigos throughout the cavern shoot ice. As you reach the icy ground, you’ll see several brighter patches. If you step on them, they will rise up as pillars and crush you against the ceiling. If you run over them quickly, you can trigger them and keep them safely raised, but be careful. Ahead, there will be a raised staircase - this leads up to more wendigos and ice crushers. Try not to get trapped behind the two ice crushers on the left. An elevator with crystal vials will take you up to the portal room with quartz flasks. Before you proceed, there are two side-rooms to explore. Open either of the ice doors, and they both open. The room to the left/south is full of wendigos, but the room to the right/north rewards you with quartz flasks and blue mana. When you’re ready, enter the portal to a new and more challenging part of Guardian of Ice.

You’ll return by the first gate to Guardian of Ice. Across from you, the other two western doors will open. Stairs will rapidly rise to the central structure. You can take the stairs for Dragonskin Bracers, but other than that, don’t worry about this area for now. Behind the two newly opened doors will be afrits in the north, and centaurs in the south - corresponding to the fire and steel levels respectively. Once they’re cleared, you’ll go through a similar routine of pulling the bullhead switch, defeating the green chaos serpent, and entering the portal room. The chambers are symmetrical, so this is the same as earlier. You can enter whichever you choose, as long as you have the fire and steel keys.

As previously stated, you must take the newly opened western portal to Guardian of Steel.

All three flights of stairs have risen so that the main structure is shaped like a trident (the symbol of the serpent riders) and it is pointing towards the seventh and mightiest gate. You have access to all switches on the structure: two (2) puzzle switches, and three (3) bullhead switches.

You are now faced with a choice. If you pull all three bullhead switches, you will open the seventh gate and the exit to the next hub. However, there is still another puzzle to solve, and it leads to the hidden level: Bright Crucible. You could finish the hub now, or take on the last puzzle. In addition, you can open the final gate and still return to the rest of the hub - acquiring the wings of wrath early is the primary reason to do this. On the other hand, you may want the greater challenge of getting through the puzzle and Bright Crucible without the benefit of the wings. It is entirely up to you. For the purposes of this walkthrough, I assume that you take on the hidden level, and I will offer strategies for players with or without the wings of wrath. For instructions on how to face the challenges beyond the seventh gate, refer to the tenth visit.

For now, you should go up the shorter flights of stairs starting in the south. At the top of each, you will find quartz flasks, and opposite the bullhead switches, two (2) puzzle switches, one on each side. Pull these, and you are told each time that "a door opened on the guardian of ice". And so, you should go to the Guardian of Ice via the eastern (first) portal, as this is the one that will bring you directly to the opened doors.

If all went well, you just returned from Guardian of Fire, where you solved one half of the puzzle to access Bright Crucible. Simply head back to the eastern portal to Guardian of Ice, where the other newly opened passage awaits.

You may recall a square enclosure of pillars near the beginning of the level, at the northern end where you first entered the map. If you go there now, you will see the stones grind as promised. The stone pillars turn aside and open the enclosure, releasing the afrits trapped within. Once inside, you will see water flowing into a drainage pool containing fléchettes. The stream flows through a portcullis - jump up to it, and you will teleport to the Bright Crucible. There, you will discover the valuable secret hinted at in the flavor text.

You return to the beginning of the level, and now it is time for the conclusion. In order to open the seventh and final gate, you have to pull three (3) bullhead switches on the central trident structure - one at the top of each staircase (in any order). Once this is done, the great southern doors swing open. Beyond, you will do battle with a horde of monsters. The first crowd that comes pouring through consists of ettins and green chaos serpents. Fléchettes come in useful here, but they are not a necessity. Once inside, you will find yourself in a semicircular arena, with monsters firing at you from behind gratings. Your first business is to take out the green chaos serpents in the northeastern and northwestern corners adjacent to the entrance - they can be dangerous snipers. To the south are large gratings with crowds of ettins and afrits behind them. You can hit them through the gratings with your weapons and fléchettes, which are especially useful for the fighter in this situation. The mage and cleric can use them too, but not as effectively. Be wary of enemies sneaking up behind you. Also, there is blue mana to be found on the northern wall adjacent to the entrance. When you are ready, you should pull the bullhead switch to the right of the green skull pillars. The pillars will swing open, and a squad of centaurs will attack. When the last one is defeated, a magic bridge will appear across the wide chasm.

Before you go across, there are a few other matters of concern. If you are the mage or cleric, there will be green chaos serpents on the far cliff for you to dispatch. There will also be a few ettins and afrits to mop up nearby. There are fléchettes on this side of the gratings, which you will probably need by now. If you approach the eastern wall, you will see the wings of wrath on a high alcove. This is an optional item, but it is fun to use. If you want them, you will have to make a risky jump. If you approach the edge of the chasm and look down a bit, you will see a large cleft in the slimy cliff-face, with stairs leading up. You must leap across the sheer drop to get there. Once you are on the stairs, there is blue mana, and you will have to fight a couple of green chaos serpents. At the top is the alcove with the wings of wrath. This powerful item lets you fly around and hover, and it keeps you safe from deadly falls. However, you will not be able to bring it to the next hub, so the time to use it is now. If you have come here early, you will find the wings of wrath useful for the Bright Crucible and its puzzle. You should also take a look at the surroundings. It is a wasteland here, and the cliff is lined with impaled human corpses - the first of many you will see. You are now entering Cronos proper.

To reach the portal, you can either cross the starry bridge or fly across to the far ledge. Many afrits lurking in the depths will notice you, but they are not a concern, as it takes them awhile to fly up. On the other side, the fighter will deal with a crowd of ettins. Here you will find the first piece of your ultimate weapon. There are also numerous crystal vials and blue mana, and a combined mana container behind the portal. When you are ready to proceed, plunge yourself through the portal to a new hub: the Shadow Wood.

Most of the hub can be skipped:

The (absence of) data was last verified in its entirety on October 4, 2022.

* The vertex count without the effect of node building is 1400.