The Effluvium is one of the maps on the mini-hub, the Gibbet. This level is a sewer area that you will visit at least twice. Stalkers roam about in the muck.

The muck and sewage prophesy what will become of Hexen unless Korax is stopped. Yet even here, it is possible to find a key to moving on. 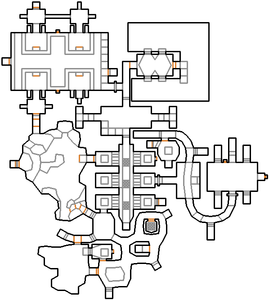 Map of Effluvium
Letters in italics refer to marked spots on the map. Sector, thing, and linedef numbers in boldface are secrets.

You’ll begin in a sewer corridor. In the distance, a Stalker boss will shoot slime, so be ready to dodge. There are alcoves on either side with Ettins, along with Mana of both types. At the end of the corridor are stairs leading down to a slimy room with Stalkers in the muck. You’ll need to press the skullface switch in the third alcove on the right (northeast), which raises the slime level so you can continue forward (it also opens the exit behind you). There are plenty of Crystal Vials here to replenish your health. Down the next corridor, you’ll pass an iron door which won’t open for now. Jump up the righthand ledge at the end, and you’ll enter a room full of hanging mutilated corpses. Outside, Centaurs, Slaughtaurs and Ettins will see you through the barred windows and become agitated. In the first window on the left, you’ll see the Dungeon Key, which is what you came for. The eastern wall with the metal knocker will open to a stairway to the outside surface. Be prepared for a big fight! Once you’ve cleared the area, you can pick up the Dungeon Key from the northern window alcove. Your objective complete, you can make your way back to the sewer corridor. The portal back to Gibbet is in the southeast alcove.

You’ll arrive in an empty room in a new part of the level. The only way forward is a sewer corridor that brings you to a larger room with Ettins. The western passage on your right opens up to the original sewer area, where you’ll proceed. Continuing down the river of slime is optional, but it will net you a Mystic Urn and a portal back to Dungeons, as described in the next paragraph.

You’ll battle a few Stalkers down the winding corridor, which leads to a spacious slime room. There are many Stalkers here, and some Mana. Turn the wheel next to the northern drain - it will close and the slime will rise high. To the east/right, you’ll find the Mystic Urn and another rusty wheel. Turning this will open the drain and bring the slime back down. Be sure to ride it down so that you don’t take any fall damage. The door will open, and if you go back down the slime river to the starting point, a portal will open. This will bring you back to where you left from Dungeons if you want to return.

Going down the righthand passage from the intersection room, you’ll go through where the stone door was earlier and into familiar territory. Continue northward as before - but as you enter the narrow corridor, you’ll find that the western iron door on your left has opened to a new area. This reddish room has 4 large slime vats, and Brown Chaos Serpents to contend with. Narrow stairs against the wall bring you to the ground level, where you’ll fight the serpents, most of which are waiting between and behind the vats. Back up the stairs, you can open an eastern wall segment by the top steps. The space inside has a Brown Chaos Serpent guarding a Krater of Might. The far western ledge has Crystal Vials. To proceed here, you’ll need to turn the two wheels above the vats in the north and south, which drain out the slime. It’s safe to jump in the vats - they each have elevators to take you back up. For the necessary path, skip the next paragraph.

The vat nearest the entrance (southeast) has nothing of interest. The vat across from it (northeast) has a Falcon Shield. The far-right/northwest vat has a portal which leads back to Castle of Grief. If you enter, you’ll be rewarded with Crystal Vials and a Combined Mana container. The adobe section of the wall will open to the moat of the castle. The return portal will place you in a cramped closet, but don’t panic - just open the wall and you’ll be right back in the vat room.

The far-left/south-west vat is the path forward. In the shadowy area, the wall section in front of you with the knocker will open. On the other side, there is a slimy cavern. In between, there is a short pitfall, so be sure to RUN across. The slime on the other side right near the pitfall, in shade, flows much faster than the rest, even though its stagnant on your side. With that said, even the Mage can safely run across without using Boots of Speed. Once in the cavern, you’ll have to battle Stalker Bosses and a Brown Chaos Serpent. It’s possible to snipe the serpent before you enter, either directly or by bursting the nearby mushrooms. Once inside, you may want to jump onto the southeast ledges to your left to gain a vantage point. By getting on the second ledge, you can use the highest outcropping as cover from the Stalker slime shots. It won’t cover you from the Brown Chaos Serpent though, for that you’ll need to get behind the wall (more reason to kill it early). Skip the next 2 paragraphs for the next necessary step.

Once you’ve cleared the room, you’ll notice that there are Quartz Flasks on a high ledge. To reach them, head to the far/southernmost area between the ledges. On your left, there will be a narrow waterfall of slime. You can use this to climb to the top. From there, you can jump across to the narrow outcropping to collect the Quartz Flasks.

The iron pillar in the east is an elevator that will bring you up to an alcove. The wall in front opens into the original sewer corridor. From here, you’ll turn right and head to the southwest alcove, across from the portal. The south/left wall has opened into a new, optional bonus area with useful items. Beware of the Stalkers as you enter. There will be blue mana in the first room. The left corridor leads to a convoluted area full of Stalkers, slime, ettins, and large structures. The structure to the left/northeast has a door in its north wall. Inside, there is a Torch, which will make a big difference in this darkened area (it also lets you see through gratings). There are more mana containers and Crystal Vials in these corridors. If you go to the southwest area on your right, you’ll come to a corner where two walls open. To the left is an elevator, to the right is a door to a small chamber. Enter the chamber and hit the skullface switch on the right - this will open things up. The nearby structure will descend to free up space. The next structure to the northeast will now have an open elevator on its east side, so you can get the Dragonskin Bracers. Back in the southwest corner, you can take the elevator up to another outside forested area with Ettins. There are Fléchettes here, and if you enter the alcove in the right/north, you can take another elevator to receive a Porkelator. Having cleared this area, you can head back to the slimy cavern by going back the way you came (the entrance is in the northwest alcove, third on the left).

To solve the last puzzle, you’ll need to go to the western outcropping where the Brown Chaos Serpent was. Open the slimy wall and step through the portal to Forsaken Outpost.