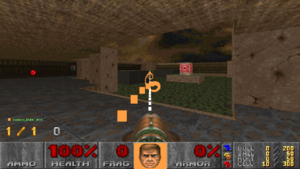 The InstaGib weapon in ZDaemon

InstaGib, meaning Instant Gib, is a popular multiplayer mutator used commonly in deathmatch games. InstaGib gives the players an extremely powerful weapon that's capable of killing enemies in a single shot, usually in the form of the Quake 2 Railgun, but other weapons can also be used (usually the Shock Rifle from Unreal Tournament or a generic sniper rifle) instead.

The name derives from the fact that such weapons are capable of causing an enemy to gib in a single shot.

Source ports such as ZDaemon and Zandronum have InstaGib integrated either as a gamemode or gameplay mutator.