Difference between revisions of "Intermission screen" 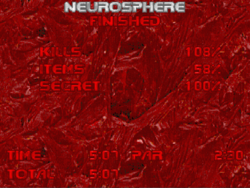 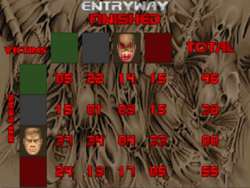 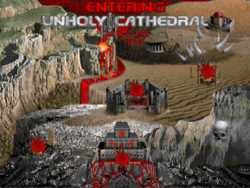 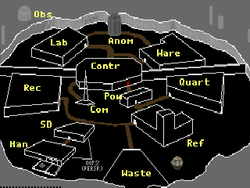 The intermission screen is displayed between levels in the Doom series and most derivative games (including Heretic). It looks different from game to game, but has the same basic elements:

In the first three episodes of Doom, while the scores are displayed, a perspective of the episode is shown, with a building (or, in episode III, possibly a terrain feature) representing each level. A press of the USE or ATTACK key (<space> or <Ctrl> by default) causes the following changes:

Thy Flesh Consumed (the fourth episode of Ultimate Doom), Doom II, Final Doom, and the final two episodes of Heretic do not display an episode perspective during the intermission, only a background image, except for Doom95 in Thy Flesh Consumed (see below in Trivia section). Pressing a key omits changes 3 and 4 listed above and enters the next level after a much shorter delay (ten tics, about a quarter of a second).

In Doom and Ultimate Doom, the final level of each episode generates no intermission screen. (This has sometimes caused adjudication problems for Compet-N submissions.) Doom II-based games do display intermission screens after MAP30, and some source ports (such as PrBoom) also include them at the end of each Doom/Ultimate Doom episode.

Heretic's intermission screen resembles Doom's in most respects, and differ mainly in cosmetic details. Unlike Doom, though, rather than percentages, the actual number of kills, items, and secrets are shown as a fraction (like, for example, 95/117 kills). Also, although Heretic will not surpass the number of monsters in a given level (as there are no spawn-shooters or resurrection abilities), certain monsters drop items which count toward the item count, causing a higher-than-normal amount of items gained.The three original episodes have screenshots showing a map of the area Corvus is fighting through, with crosses rather than bullet holes showing completed levels.

If the player's selected weapon is the chainsaw, the chainsaw is heard revving up when the level starts. This effect is not actually deliberately coded into the game; it is a natural consequence of the implementation of the screen melt effect.