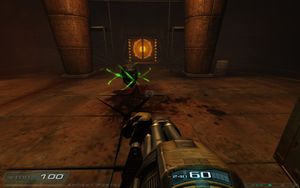 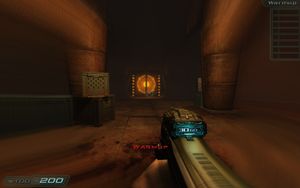 The visual effect created by invulnerability.
This article is about the power-up in Doom 3. For other versions of this item, see:

Invulnerability occurs as a multiplayer-only power-up item in Doom 3: Resurrection of Evil. It grants 30 seconds of protection from almost all sources of damage, excluding instantly fatal environmental damage such as lethal fall zones. During this period, the player's field of vision is blurred around the outside edges with a liquid-like warping effect which somewhat resembles a classic Doom engine hall of mirrors due to the way it smears the surrounding portions of the view.

When taken, the item will respawn after 60 seconds.

It appears similar to the berserker power-up, consisting of a demonic-looking mask with narrow eye slits, but lacking horns in this case, and with a green particle effect and eye textures instead of red.

Invulnerability was intended to appear in Doom 3 itself at some point, as a commented-out entityDef can be found for it in the def/powerups.def file in pak000.pk4. However, the resources it references do not otherwise exist, and no effect was defined for it to use in the game code.