Difference between revisions of "Invulnerability Hunter" 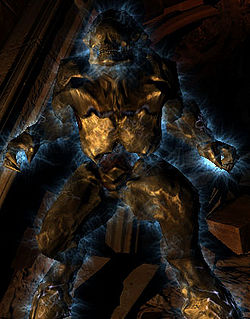 The Invulnerability Hunter is a boss monster found in Doom 3: Resurrection of Evil. It is the final Hunter the player will encounter.

The Invulnerability Hunter draws power from three active power coils in the room, rendering it invincible. Destroying the open coil will cause a temporary shutdown, leaving the Hunter vulnerable. When the remaining coils reactivate, repeat the process. When all the coils are destroyed, the Hunter will no longer be able to retain its invulnerability. One can hide from the Hunter by running underground, but it will stomp the ground to damage the player should he be standing up.

When it is vulnerable to attack use the artifact's helltime abillity and pull out the chaingun and start firing until he becomes invulnerable.

when it is in its invulnerability state, it will still attack you. it will shoot energy balls and electric shockwaves.

Killing it will gain the invulnerability power for the Artifact.