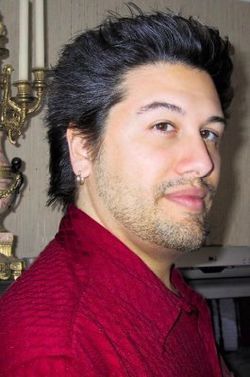 Alfonso John Romero (born October 28, 1967) is a famous figure in the computer gaming industry. He worked for id Software from its founding in 1991 until 1996 and was involved in the creation of several milestone games including Commander Keen, Wolfenstein 3D, Doom, Doom II and Quake, as well as serving as an executive producer on Heretic and Hexen. Romero's head is the final boss at the end of MAP30 of Doom II, where it is sitting on a spike inside the head of the enormous goat-demon often known as the Icon of Sin (aka "Baphomet" or "Demon-spitter"). At the beginning of MAP30, the monster says something incomprehensible and evil sounding, which is actually the voice of John Romero saying "To win the game you must kill me, John Romero", backwards.

In 1996 Romero was fired from iD Software for "not working hard enough"[1]. Romero then co-founded Ion Storm Inc. in Dallas, Texas with id co-worker Tom Hall, where he designed and produced Daikatana. The game's critical panning damaged Romero's reputation, who received popular blame for questionable development decisions worsened by his name being hyped in the game's early marketing. In particular, an infamous 1997 ad (by Ion's then-CEO Mike Wilson) with the slogan "John Romero's about to make you his bitch" upset many people. Romero left with Tom Hall immediately after the release of Hall's Anachronox game and the subsequent closing of the Dallas Ion Storm office. They then co-founded Monkeystone Games in July of 2001.

Between 1999 and 2003, Romero was involved with Stevie Case, a prominent female gaming industry figure who beat him in a Quake deathmatch. Until their breakup in early 2003, Case was the chief operating officer of Monkeystone Games.

In 2002, he put his Ferrari up for auction on eBay. Heavily modified, one could plug a laptop into the parallel port in the back of the passenger's seat, and tune the engine while running.

In mid-October 2003, Romero joined Midway Games as Project Lead on Gauntlet: Seven Sorrows. While he continued to maintain his working relationship with Monkeystone, Lucas Davis took over running the office. The Monkeystone team moved to Austin, Texas to work on Midway's Area 51 title until its release. Monkeystone Games closed down in January 2005. John moved from Project Lead to Creative Director of Internal Studio during this time.

At the end of June 2005, Romero left Midway Games mere months before the completion of Gauntlet: Seven Sorrows.

On August 31, 2005 Romero confirmed that since leaving Midway he has been hard at work on a yet-to-be-announced project at his newly opened development studio, preliminarily named Slipgate Ironworks. "For the record," Romero writes, "I'm co-founder of a new game company in the Bay Area and am much better off in many ways than I was at Midway." A shroud of secrecy lies over the company and its secret project.

In January 2004, he married Raluca Alexandra Plesca in her home country of Romania and hometown of Bucharest.

In October 2012, he married Brenda Garno/Brathwaite at Disneyland.

When designing levels for Doom, Romero came up with several rules, among them: