Revision as of 16:11, 30 November 2022 by Xymph (talk | contribs) (→‎Data: add Doom64 variations)
(diff) ← Older revision | Latest revision (diff) | Newer revision → (diff)
A checked version of this page, approved on 30 November 2022, was based on this revision.
This article is about the keycards and skulls found as in-game items. For the keys used for moving, shooting, etc., see Controls. 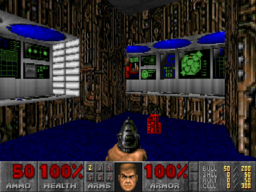 The blue keycard in ATTACK.WAD from the Master Levels.

The blue keycard found in MAP29: Outpost Omega from Doom 64.

The red keycard in MAP02 of Alien Vendetta.

The red keycard in in MAP05: Tech Center from Doom 64.

The yellow keycard in MAP02 of Alien Vendetta.

The yellow keycard in MAP07: Research Lab from Doom 64.

The blue skull key in E4M1 of Doom.

The red skull key in MAP09 of Alien Vendetta.

The red skull key in MAP20: Breakdown from Doom 64.

The yellow skull key in MAP28 of Doom II.

The yellow skull key in MAP32: Hectic from Doom 64.