This level occupies the map slot MAP00. For other maps which occupy this slot, see Category:MAP00.

MAP00: Garage Punk is the tutorial map of Ashes 2063. It was designed by Vostyok and uses the music track "The Mender Haunts" by John Weekley (PRIMEVAL). The par time defined in MAPINFO is 5:10. 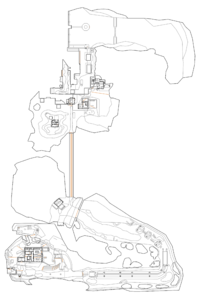 Map of Garage Punk
Letters in italics refer to marked spots on the map. Sector, thing, and linedef numbers in boldface are secrets which count toward the end-of-level tally.

The southern portion of the map was not included in the original 1.00 release of Episode 1, only being present in the 2021 'Enriched' downloads. This section was in-fact previously found only in the early beta downloads from 2015, where it took the place of the eventual simplified tutorial. It was decided during the making of Enriched edition that the current tutorial lacked certain aspects of gameplay and setting. New details such as the nuclear waste truck and dam exterior were added in order to fit the style of later maps.