Revision as of 10:58, 28 October 2022 by Gauss (talk | contribs) (→‎Bugs: Known issue. See Talk:MAP28: Baron's Lair (PlayStation Final Doom) for more)
(diff) ← Older revision | Latest revision (diff) | Newer revision → (diff)
A checked version of this page, approved on 28 October 2022, was based on this revision.
This level occupies the map slot MAP01. For other maps which occupy this slot, see Category:MAP01.

MAP01: Attack is the first map of PlayStation Final Doom. It is a console version of ATTACK.WAD which was originally designed by Tim Willits. Changes for the PlayStation port were authored by Tim Heydelaar.[1] It uses the music track "Bells Of Agony".

The level is set in an unknown base similar to a starport and is notable for its difficulty and presence of almost all weapons except the BFG9000. 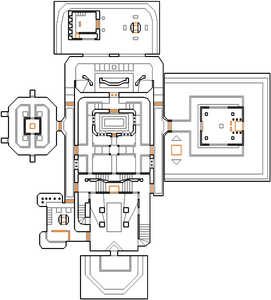 Map of Attack
Letters in italics refer to marked spots on the map. Sector, thing, and linedef numbers in boldface are secrets which count toward the end-of-level tally.

You start the level on the balcony of the southernmost part. A shotgun guy will see you right at the start but you can dodge it by strafing to the left. Obtain your first weapon, the shotgun, by killing the shotgun guy. Be careful, as there are more enemies inside: three shotgun guys (Not Too Rough skill level and lower), four shotgun guys (Hurt Me Plenty) and four shotgun guys and one chaingunner (Ultra-Violence). If you are playing on UV you can obtain the second weapon, the chaingun, if you kill the chaingunner. You can boldly make fire noise here, as all the enemies in this area are ambush and will only wake up on sight.

The first keycard to get on this level is the red. Turn to the right (east) wall of the room and you will see a staircase with six health bonuses. Beware of another shotgun guy at the top of the staircase as it may not have woken up. Ascend the stairs, go forward and open the door to the right. Go to the northern door in the next room killing all the demons on your way. By opening the door kill another imp in the discovered room. This room is still dangerous, so before taking the red keycard kill all the enemies including a chaingunner and a shotgun guy. Take the keycard and do not forget the plasma gun and energy cells.

There are other ways to get this keycard:

Once you have the red key go to the western long hall. Open the door from its left part and kill both shotgun guys (doing so you can kill that enemies without waking up the enemies in the south side of this room). Now kill the imps and one spectre on the south side of the room. Be aware there are a chaingunner behind the wall and four lost souls in the bottom pit if your skill level is UV. Collect all the seen items in the room and take the blue keycard within the structure. This will open four traps each containing four imps (HMP and lower) or two imps and two chaingunners (UV). Note that the north and south traps both hold chaingunners on UV.

With the blue key head into the eastern hall which is similar to the western one but has a blue door instead of red. Again, open the door so you will be concealed from one enemy behind the wall and kill it with your shotgun or chaingun. Once both of them are dead head into the building or visit the left (north) and right (south) sides of the balcony to get items. Inside the building fight the enemies: two shotgun guys behind the columns (NTR and lower), a lost soul (HMP) or seven lost souls (UV). Take the yellow keycard and take the three rockets and rocket launcher before moving on.

Open the dark pillars in the yellow keycard room, so you can use the lift going down. At the bottom you will be outside. If you go left here you can find shotgun shells and a medikit. However, you will also encounter some dangerous enemies there. Anyway, go to the right (south) and keep going forward until you meet four teleporter pads. Before you use one carefully wall behind them and collect two stimpacks (if you need), three items of shotgun shell and a megaarmor. Enter one of the teleporters (all they lead to one area). In the next area be prepared for a fight with more enemies. This includes two revenants (only HMP and higher) who could see you earlier. Use the barrels to your advantage. Once done with them head behind the large building and prepare for another ambush: a shotgun guy (all skills) or a shotgun guy and a chaingunner (UV). Collect the shells and return to the yellow door. Before entering in you can find secret #1. Behind the door there are an exit switch and an enemy: a shotgun guy (NTR or lower), a chaingunner (HMP) or a revenant (UV). Prepare for a fight and when the enemy is killed do not flip the switch yet. Ascend on the stairs up and lower a lift, which will lead you to an imp and three health bonuses.

After that, flip the switch to exit the level.

Some textures used on the PC—notably stone-type textures—are replaced with textures that are used throughout the map, giving a more coherent appearance. Rooms are generally darker.