Revision as of 08:27, 31 July 2022 by XymphBot (talk | contribs) (→‎Speedrunning: Automated edit - Update DSDA map records)
(diff) ← Older revision | Latest revision (diff) | Newer revision → (diff)
A checked version of this page, approved on 31 July 2022, was based on this revision.
This level occupies the map slot MAP01. For other maps which occupy this slot, see Category:MAP01.

MAP01: Trooper Trauma is the first map of 1 Monster Megawad. It was designed by Mike Wiesenauer (deldelda) with later edits by Mark Pedersen (Macro11_1), and uses the music track "I Sawed the Demons" from Doom E2M1: Deimos Anomaly.

Like all maps in the megawad, the map features only one type of monster, the zombieman. It is a short level, set in a techbase of dark metal. 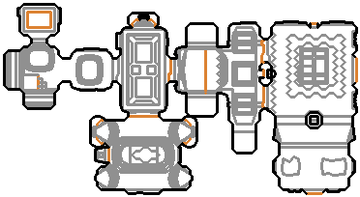 Map of Trooper Trauma
Letters in italics refer to marked spots on the map. Sector, thing, and linedef numbers in boldface are secrets which count toward the end-of-level tally.

Head out of the first room and through the door to the right, then through any of two doors, and press the switch near the floor to lower the lifts. Get on the lifts and ride them up, then shoot the switch on the far wall. This opens a section of the room behind you. Press the switch in there, then drop down and head back to the second room, where a door has now opened. Climb on the stack of crates; two niches will open in the wall - enter the western one, then shoot the far away switch. This will open the door leading to the exit.

The map was originally posted by Mike Wiesenauer in the forum thread "for fun" and not as an entry into the megawad.[1] However, he changed his mind based on the map's good reception. The first version of the map did not contain a shotgun, as the author believed it made the map too easy.[2] The name of the map was suggested by Robert Eckhardt (Ichor).[3]