MAP02: A Dead Man's Party, aka the Underworld map, is the secondary hub map of Ghoul School 3D. It depicts the vast catacombs beneath the high school, complete with a small town of friendly ghouls. It was designed by Mike MacDee (Impie) and uses the music track "". 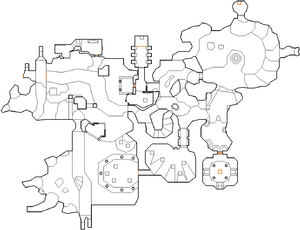 Map of A Dead Man's Party
Letters in italics refer to marked spots on the map. Sector, thing, and linedef numbers in boldface are secrets which count toward the end-of-level tally.