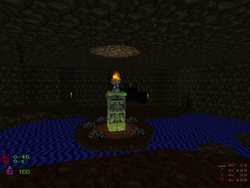 As with the School, ghosts will spawn in the Underworld every now and then to revive slain monsters; here, however, there is no way to shut it off.

Explore the Underworld and look for two other switches: one behind the waterfall in the far southwest corner of the map, and another on a ledge accessed from Ghoul Town's lower level. These switches raise stairs to the upper level of Ghoul Town, also found in the southwest: jump to the Spanish-style ghoul house with the arch and go inside to find the switch that raises the rock barrier. Now you can jump across to the elevator switch and enter the Haunt.