Revision as of 05:58, 3 December 2022 by XymphBot (talk | contribs) (Automated edit - Remove level stub)
(diff) ← Older revision | Latest revision (diff) | Newer revision → (diff)
A checked version of this page, approved on 3 December 2022, was based on this revision.
This level occupies the map slot MAP02. For other maps which occupy this slot, see Category:MAP02.

MAP02: The Terraformer is the second level of Doom 64, designed by Randy Estrella. It uses the music track "Warped Hive". Most of this level is set in dark areas around the same tech base. The level introduces spectres. 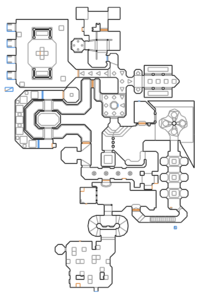 Map of The Terraformer
Letters in italics refer to marked spots on the map. Sector and Thing numbers in boldface are secrets which count toward the end-of-level tally.

Killing the first trooper in front of you will alert more near the starting area. Several imps to your left give a hint where to return later with a yellow key.

After cleaning the starting area, enter a smaller door in the right niche. The following room is pitch black, with the exception of red symbols on the floor. Interpreting the triangles as arrow heads and diamonds as junctions, they lead your way into the darkness. The way to the right is locked. Careful to the left: a lift takes you own to a cell block where several demons get released after you passed the hallway. But there are several boxes of bullets for a chaingun and medikits.

Returning to the darkroom, there is now a circular way in another dark room. One of the triangles on the floor points to a switch on a pillar in the center, which lowers and releases a blue armor, just in time before several soldiers and imps enter. In an outer area, a yellow platform provides a light amplification visor. To the left of this part you can already see the Terraformer machine and a red door, boxes of bullets and stimpacks, and a soulsphere behind a partially broken fence.

The previously locked door is now open and leads into a yellow room with a box in the middle, where the blue key is placed on top, next to several goodies like a backpack. The box can be lowered with a switch, but this teleports the blue key away before you can get it. In each corner of the room you will see a box where that key gets teleported from one to another randomly, eventually staying on one of them.

Four niches will open, each with a switch in the back wall, and each with two computer screen sockets – except one. The switch in this niche lowers the box with the blue key for a brief time. Grabbing it makes some imps appear. The other three niches with the screens are traps with crushing ceilings if their switches are pressed.

Now you can leave the yellow room and follow the path through the blue door. The following omega-shaped floor contains a few imps and leads around a basement area with crushing ceilings. You can avoid them by trying to halt on yellow lighted floor patches and get the red key; return to the blue floor with the teleporter. The following floor contains imps in a bright lighted niche to the right, but also four rockets. Use them on the spectres in the following hallway with rotating yellow spots in the ceiling. Now you can get the soulsphere and return to the Terraformer control room.

Open the red door, get surprised by appearing imps, activate the Terraformer machine (which closes the control room), watch it working its way down into the floor, and leave the room when it finished (and unlocked the red door). Jump down the hole and find a cell block with imps and caged soldiers. The last cage with a broken fence contains a switch that opens a wall with a floor containing an escalator leading upwards to a guarded storage area.

Pass the door and turn left. Straight in front of you is a yellow lighted control room with imps. To the left you will see two half winding stairs to a storage room with crates. Hugging the right wall leads you to a switch that lowers a teleporter to the control room. Pressing the switch inside here lowers the yellow key.