MAP03: A Barlow in the Belfry (Ghoul School 3D)

MAP03: A Barlow in the Belfry, aka the Haunt map, is a vampire lair complete with dungeon, mad science lab, and an eerie dining room. It is where the climax of Ghoul School 3D takes place, though Spike will visit it several times. It was designed by Mike MacDee (Impie) and uses the music track "". 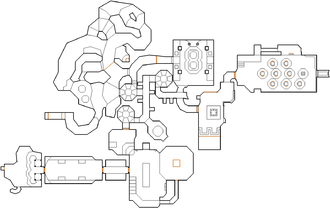 Map of A Barlow in the Belfry
Letters in italics refer to marked spots on the map. Sector, thing, and linedef numbers in boldface are secrets which count toward the end-of-level tally.

After a series of battles take you through the foyer, arcade, and dining room, you'll find Dr. Femur hiding in the storeroom with the blue door. She gives you the green key and tells you to use Prof. Mengeler's time machine (MAP01: Tardy, but Not Dead) to go back in time (MAP04: Totenhaus) and steal a fresh copy of Barlow's mausoleum key (the blue key) since the present day key has broken.