Revision as of 05:59, 3 December 2022 by XymphBot (talk | contribs) (Automated edit - Remove level stub)
(diff) ← Older revision | Latest revision (diff) | Newer revision → (diff)
A checked version of this page, approved on 3 December 2022, was based on this revision.
This level occupies the map slot MAP03. For other maps which occupy this slot, see Category:MAP03. 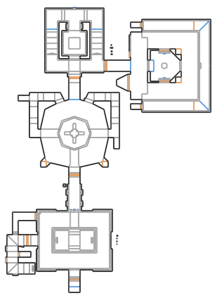 Map of Main Engineering
Letters in italics refer to marked spots on the map. Sector and Thing numbers in boldface are secrets which count toward the end-of-level tally.

After pressing the switch that alters the yellow room's layout and spawns in several imps and lost souls, walk past the said switch (now lowered) and immediately turn around and exit the yellow door. A soulsphere will appear outside the yellow door on the large central platform where the blue key and rocket launcher previously sitting on. If it is not collected before activating the switch that triggers the appearance of the red key, it will be permanently replaced by the red key.