Revision as of 13:09, 3 April 2022 by XymphBot (talk | contribs) (→‎Speedrunning: Automated edit - Update DSDA map records)
(diff) ← Older revision | Latest revision (diff) | Newer revision → (diff)
A checked version of this page, approved on 3 April 2022, was based on this revision.
This level occupies the map slot MAP03. For other maps which occupy this slot, see Category:MAP03.

MAP03: Shackled is the third map of Hell Revealed II. It was designed by Jonas Feragen and uses the music track "Old Bones" by Sam Woodman. 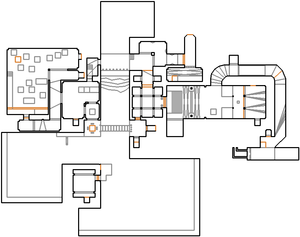 Map of Shackled
Letters in italics refer to marked spots on the map. Sector, thing, and linedef numbers in boldface are secrets which count toward the end-of-level tally.

Grab the shotgun directly behind your starting point and get rid of the shotgun guys guarding the super shotgun. Head into the open hallway to the left and go right from there. You have a view of the cargo area you need to go in later, and there are several enemies present inside. Kill the imps and press the switch to open up the other end of the hallway. Kill more imps here and you will find the door leading to the cargo bay. Make sure all the enemies inside are dead, then maneuver around the crates until you find the blue keycard. Flip the switch and quickly maneuver back to the door before it closes; there is a staircase on the west side so you can reach the walkway with the zombiemen. When you succeed, head back to the start and through the passage behind where the super shotgun was. Take out the Hell knights and zombiemen, then cross to the other side. Be prepared for a nasty ambush when you grab the box of shotgun shells in front of the blue door. After getting rid of the monsters there, ignore the blue door for now and head into their compartment where you will find a door leading to a gray-walled area. Kill the demons, press the switch to open the next part of the area, and collect the yellow keycard from the monsters. Now go to the blue door and open it.

This square room has several color doors; take the yellow one for a large room with several monsters. You will also see the red key here. Go up the stairs on the left and follow the hallway. When you see the barons of Hell, you may also want to check behind you for two arch-viles. At the end of the hall is a teleporter, which leads to the room behind the red key. Press the switch to lower a box of rockets on ground floor, then jump out the window to get the red keycard. Look out for a wall of revenants on the left as you leave. Back at the square room with color doors, take the red one to find two more doors. The one to your left can be opened, and it has a Hell knight and a switch. The switch opens the other door for an imp and a teleporter. Take it to a small room with Hell knights. Take the door here for a mancubus and a gargoyle switch, then teleport back. The bars blocking way to the bridge are now gone, so you can cross to the exit now.

The red door at the starting point contains a plasma gun.