Revision as of 11:18, 3 April 2022 by XymphBot (talk | contribs) (→‎Speedrunning: Automated edit - Update DSDA map records)
(diff) ← Older revision | Latest revision (diff) | Newer revision → (diff)
A checked version of this page, approved on 3 April 2022, was based on this revision.
This level occupies the map slot MAP04. For other maps which occupy this slot, see Category:MAP04.

MAP04: Deja Vu is the fourth map of Community Chest 2. It was designed by Gene Bird, and was originally released standalone as part of his Blind Alley series. 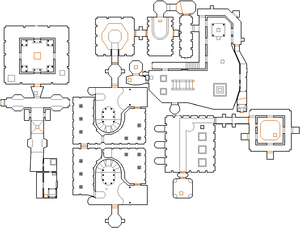 Map of Deja Vu
Letters in italics refer to marked spots on the map. Sector, thing, and linedef numbers in boldface are secrets which count toward the end-of-level tally.

Almost every room in this map has a variety of monsters, so take note of that.

The pentagram face here is a door. Open it and climb up the stairs here. You will have to make a running jump to the left. When you make it, open the door and at the end, flip the switch. This causes a pillar to rise in the previous room allowing access to the next area. Be sure to pick up the super shotgun along the way. Open the door here, and flip the switch in the far corner of this room to open a passageway further on. Grab the chaingun and keep going until you reach a switch at a dead end. Pressing it opens the walls, and monsters surround you at this point. Take the rocket launcher and go through the doors to the east and drop down into the nukage (do not worry, it is harmless), making sure you pick up the red skull key along the way. Ride the lift up, open the door, and press the switch to open a passage behind you. At the fork, you have to go right, and then up a staircase to another switch which opens the blocked passage. Keep going and you will eventually reach the outdoor courtyard with the yellow skull key. Attempting to pick it up triggers a monster ambush. After the yellow door, enter the teleporter, and after a few doors you will end up in another nukage-filled zone. Pressing the switch here surrounds you with monsters and opens up the door to the east, into a square-shaped hallway. Go through this hallway and flip the switch, which will let you loop around into the center structure where pressing the switch lowers another teleporter to a different area.

You will end up in a house of sorts, which, after a few doors, becomes what appears to be a prison. Flip two switches in this area and you can head north into another square-shaped hallway. The switch to the north opens the doors to the middle of the square as well as the teleporter that was inaccessible in the prison-like area. It also causes several monsters to teleport around your vicinity. The middle square block with the computer area map can be lowered by pressing it. When done here, take the teleport in the prison section to warp back to the outdoor courtyard where the yellow key was. Here, a final door has opened. Pressing the switch will end the map.