Revision as of 10:30, 21 February 2022 by XymphBot (talk | contribs) (→‎Speedrunning: Automated edit - Verify no DSDA map records; rm empty Misc section)
(diff) ← Older revision | Latest revision (diff) | Newer revision → (diff)
A checked version of this page, approved on 21 February 2022, was based on this revision.
This level occupies the map slot MAP04. For other maps which occupy this slot, see Category:MAP04.

MAP04: Dirty Water is the fourth map of the second episode of Back to Saturn X. It was designed by Mike Alfredson (Use3D) and Richard Frei (Tarnsman), and uses the music track "Lost City," by Sarah Mancuso (esselfortium). In the official add-on version, this level's name is Sunken Sanctuary. 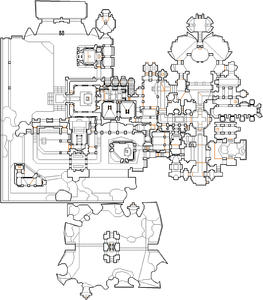 Map of Dirty Water
Letters in italics refer to marked spots on the map. Sector, thing, and linedef numbers in boldface are secrets which count toward the end-of-level tally.

* The vertex count without the effect of node building is 5172.