Revision as of 10:56, 7 December 2021 by XymphBot (talk | contribs) (→‎Speedrunning: Automated edit - Verify no DSDA map records; rm empty Misc section)
(diff) ← Older revision | Latest revision (diff) | Newer revision → (diff)
A checked version of this page, approved on 7 December 2021, was based on this revision.
This level occupies the map slot MAP04. For other maps which occupy this slot, see Category:MAP04.

MAP04: Going Down? is the fourth map of ASDOOMII. It was designed by Andy Sheppard. 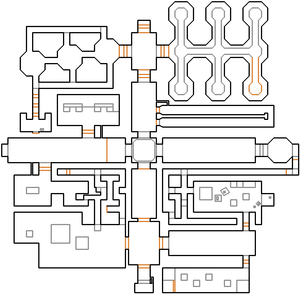 Map of Going Down?
Letters in italics refer to marked spots on the map. Sector, thing, and linedef numbers in boldface are secrets which count toward the end-of-level tally.

Two deathmatch starts (Things 4 and 165) have no flags set for any of the three difficulty classes, but because of special handling in the engine, they function normally in the level.