Difference between revisions of "MAP04: Hell Mountain (No Rest for the Living)"

MAP04: Hell Mountain is the fourth map of No Rest for the Living. It was designed by Russell Meakim and uses the music track "Shawn's Got The Shotgun". The par time is 1:45. 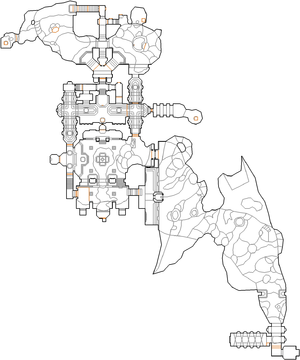 Exit to secret level - Found behind the blood waterfall is a teleporter, takes you to the red skull key. Take the teleporter there and back to the level, climb the small mound with the skull switch which will open a door ahead, in UV a cacodemon is inside and some demons. Enter and open secret door on the right by the candles, flick switch to open door to the left. Flick another switch to open a door beside the first switch and lowers bars. Go through and hit that switch and then back to the 2nd switch and turn left up the stairs, lower the lift and sprint across to the secret exit before the wall shuts again. If you fail, go back on the lift again and try once more