Revision as of 05:59, 3 December 2022 by XymphBot (talk | contribs) (Automated edit - Remove level stub)
(diff) ← Older revision | Latest revision (diff) | Newer revision → (diff)
A checked version of this page, approved on 3 December 2022, was based on this revision.
This level occupies the map slot MAP04. For other maps which occupy this slot, see Category:MAP04.

MAP04: Holding Area is the fourth map of Doom 64, designed by Randy Estrella. This level is small and has the secret exit to MAP29: Outpost Omega. The level introduces Hell knights and the first half of the level is a maze filled with zombies, imps, spectres and demons that spring up as the player flips switches and opens up new areas. It uses the music track "Spaces Between" which is a remix of the music used in E1M3: Toxin Refinery in the Sony PlayStation port of Doom. 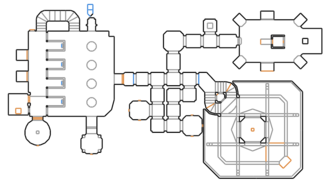 Map of Holding Area
Letters in italics refer to marked spots on the map. Sector and Thing numbers in boldface are secrets which count toward the end-of-level tally.

You begin the map in an enclosed room, facing a switch. Lower the platform you are on with that switch and clean the room from zombiemen and spectres. Exit the room and into the corridor, where you can find a supercharge waiting on the platform to the right. Follow the maze to an imp next to a cluster of switches which reveals another parts of the corridor - including more zombies, demons and spectres, of course.

At the next end of the maze, your first Hell knight awaits you, next to a medikit, fortunately. Press all the switches inside that room to reveal more parts of the maze and opening more connections. To the right of the starting room you will find a brighter area with winding stairs around a pillar. More imps and Hell knights are waiting for you on a floor surrounding a control room with imps which opens its windows when you pass the corner opposite to the entrance. A pillar with switches on each four sides rises and lowers regularly. Shoot one of the switches on the pillar in the control room to lower a wall keeping you from the chaingun inside the pillar between the winding stairs.

Jump down the platform (which you can afterwards use as lift) into a moat with lost souls, and find the blue key here. Now you can enter the last room, fight several lost souls, follow the staircase upwards and meet another Hell knight and zombieman. Then the puzzle with the four switches has to be solved if you want to find another secret level. More lost souls are released. The normal exit room behind a blue door contains more Hell knights, the teleporter room to the secret run (to the right of the blue door) a few zombies. The secret exit room has Hell knights too.