MAP04 is the fourth level of Brotherhood of Ruin. It was designed by Kristian Aro and uses the music track "We Like the Juice Sir" composed by Peter Tomaselli (Kniggit). 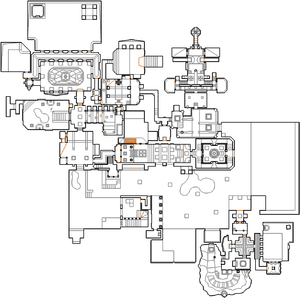 Move through the courtyard into the foyer of the temple. You will have to carefully run across pillars over lava; be careful as there is no escaping if you fall in. Press the switch here to open the door on the south end of the foyer. Grabbing the soul sphere on the wall in this area will lower a small closet with revenants. Go back and head south into the next small courtyard and take the small passage to the southeast with candles. Past the passage, you need to go through lava to the next area, and then head around to the room with the caged torch to a switch. This opens up the closed door back in the small courtyard, so go back there. This next courtyard is very large with a number of places to go. For now, go up the steps to the building nearest to you and hit the switch. This raises bars barring access to the south central building. Head there (if you circle around the building you will find a small niche with health bonus pickups, ammo, a Hell knight, and a plasma gun) and go through the building till you find another switch. After flipping it, go all the way to the east in the courtyard, and then north up to a door which is now open. Go north in the next room, and keep going north till you find the next switch, which will open up a passage further back. Go back south to the room which you entered from the courtyard, and the passage will be to your right. Follow this passage and you will find the red skull key. Now go back to the courtyard and head southeast, being wary as a cyberdemon is now in the area. If you approach the red door an arch-vile will pop up in front of you. Go in and when you reach a small four-way intersection go right and you will find a switch and a lift. Take the lift down and go to the river. Go around the outer ledge and grab the yellow skull key. Now you need to head back to the foyer of the first temple, as the yellow key door is to the north (barely marked by the insignias on the wall). Behind the yellow door is a cloister of sorts, head west and take the lift up and go down the hallway all the way to the exit.