MAP06: Marathon Lab is the sixth map of 2048 Unleashed. It was designed by Chris Harriman (Impboy) and Joshua O'Sullivan (Dragonfly), and uses the music track "". 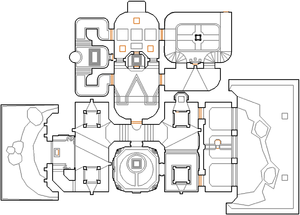 Map of Marathon Lab
Letters in italics refer to marked spots on the map. Sector, thing, and linedef numbers in boldface are secrets which count toward the end-of-level tally.

Take the armor (and shotgun on I'm Too Young To Die and Hey Not Too Rough skill levels) then turn right and head through the east doorway blocked by one or two zombiemen. Kill two or three shotgun guys waiting in the next room then head east through a door to face four zombiemen (plus a demon on Hurt Me Plenty (HMP) skill level or higher) guarding a switch which will lower a pillar on the other side of the wall holding the red keycard. Go back to the starting room and head through the north doorway this time, then turn right and head round the computer terminals in front of you to find another door. Open the door and turn right to find the red key being guarded by a chaingunner, along with two demons on Ultra-Violence (UV) and Nightmare (NM) skill levels.

Return to the doorway north of the starting room and head west, then look round the computer terminals on your left to find a passage leading to a switch being guarded by zombies as well as a demon on UV and NM. Press the switch and kill the shotgun guys that are revealed in the previous room (along with imps and demons on higher skill levels) then go back to the doorway north of the starting room - a door has been revealed next to this doorway which you can open to find some zombies as well as a Hell knight waiting behind the door on UV and NM. There are two doors in this room that require the red key to open, but go through the west door first and follow the passage to find some shotgun guys (plus another knight on UV and NM) guarding a button which you need to press.

Go back to the previous room and head through the east door this time, where two shotgun guys (and a knight on HMP or higher) are guarding a chamber with two doorways leading out of it. Go through the east doorway and head up the steps to find more shotgun guys guarding a skull switch, which will lower some bars behind you to reveal a second button - press this button then go back upstairs to the skull switch, where a bridge has risen letting you drop down to the door in the west wall. Go through the door and step across the platforms (which raised when you pressed the two buttons) to reach the exit door in the south wall. Open the door and kill a revenant waiting behind it, then flip the switch to finish the level.

The level's name is a reference to the Marathon series of games. The symbol on the floor of the starting room is also taken from those games.