Revision as of 12:18, 3 April 2022 by XymphBot (talk | contribs) (→‎Speedrunning: Automated edit - Update DSDA map records)
(diff) ← Older revision | Latest revision (diff) | Newer revision → (diff)
A checked version of this page, approved on 3 April 2022, was based on this revision.
This level occupies the map slot MAP06. For other maps which occupy this slot, see Category:MAP06.

MAP06: The View is the sixth map of Community Chest 2. It was designed by Thomas Lutrov (Lutrov71), and uses the music track "Kitchen Ace (and Taking Names)" from Doom.

It is basically a large tech/outdoor map with a slight MAP01: Entryway influence. Many of the areas are large and open, giving a lot of room to play. A fair amount of attention has been given to detail and lighting.

The gameplay is fairly easy and simple but various types of it are included. Some areas put you up against many hitscan enemies, while others are loaded with monsters. 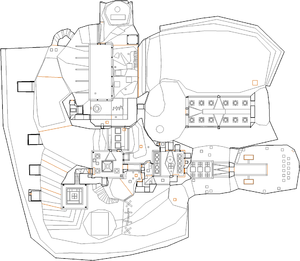 Map of The View
Letters in italics refer to marked spots on the map. Sector, thing, and linedef numbers in boldface are secrets which count toward the end-of-level tally.

Head up the stairs from the start picking up the shotguns along the way and in the room with the nukage flow, hit the lift. Follow the path until you find a room with a chaingun. The door you need to head through is to the east. Grab the rocket launcher and take the lift up. When you step onto the nukage, look out for the phalanx of zombies and grab one of the radiation suits. Make sure you flip the switch here. It opens up boxes containing cacodemons, but more importantly, it opens up the northern door in the room containing the chaingun. Behind this door is another open courtyard (there is a cyberdemon wandering on a ledge here in co-op), with another lift to the east. Take it, and head down either hallway going north when you can and pick up the yellow keycard. Head back to the room with the nukage flow and press the yellow switch here to raise the bars. Take the teleporter and press the switch afterwards, being sure to take the plasma gun while you do so. In this open area, the organic stairs reach the red key, but it is inaccessible at the moment. Head onto the railed walkway and into the nukage on the right pressing the switch to lower the bars on the walkway. The switch in the cave here lowers the red key. Press the red switch near the entrance of this area and go all the way down the field watching out for surprise ambushes from the monsters along the way. Climb the final organic staircase and then enter the exit teleporter.

There is no Player 4 Start Thing in the map. Thus, you can only play with up to two other players on this map in cooperative multiplayer. Furthermore, the Player 3 Start thing is located in the room following the first staircase, far away from the first two players. Whether this was intentional or not is unknown.

Because of a nodebuilding error, linedef 1450, one of the lights in the southern middle of the map, appears darker than the light it projects (the same light level as the unlit sections of the room,) and its shade bleeds vertically into the floor and ceiling.

Linedef 1708, part of sector 302 (the second sector north from the first light from the south in the southern middle of the level,) overlaps with linedef 1707, part of sector 305 (the sector immediately south of it.) In addition, both of them reference sector 237, the unlit sections of the room; 1707 does so on its back side, and 1708 does on its front side. This results in both sectors showing sector 237's ceiling flat instead of the one they are assigned.

As one of the secrets is under an untagged gunfire door, you can only get 80% Secrets, unless the source port you are using allows untagged switch and gunfire door linedefs to apply locally, or the noclip cheat is used.

Sector 524 (the grassy section of the exit area) is unclosed, as the southern endpoint of linedef 4128 (the tripwire that summons the arch-vile) stretches outside of the sector.

* The vertex count without the effect of node building is 4169.