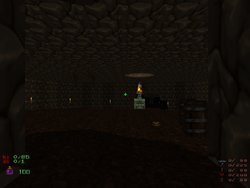 Go through the cafeteria to the PE lockers and crawl through the air vents to reach the kitchen, where you'll find the Yellow Key. It opens the following doors: